10th Anniversary of the UN Declaration on the Rights of Indigenous Peoples: Canada needs a legislative framework to fulfill the promise of this vital human rights instrument

The United Nations Declaration on the Rights of Indigenous Peoples provides a crucial framework to achieve reconciliation. Such a human rights-based approach is essential to address the racism and discrimination that has caused such profound harm to Indigenous Peoples in Canada and around the world. Violations include uprooting Indigenous Peoples from their territories and resources, failure to honour Treaties, tearing Indigenous children from their families, and making Indigenous women, girls and two-spirited people the targets of unimaginable violence.

The adoption of the UN Declaration ten years ago today – on September 13, 2007 – was a crucial victory in the evolution of international human rights law. This historic achievement was possible because Indigenous Peoples persisted for more than two decades in advancing a strong and powerful vision of self-determination, decolonization and non-discrimination.

The adoption of the Declaration was also made possible because, by the end of this process, influential states including Canada had finally come to accept the necessity and urgency of a new relationship with Indigenous Peoples. 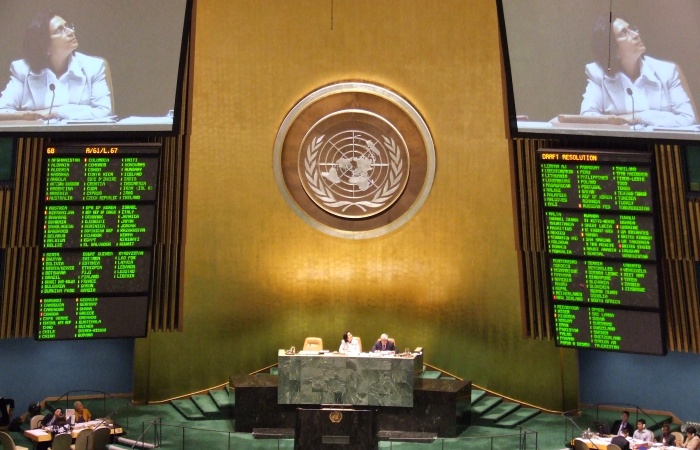 The vote to adopt the UN Declaration on the Rights of Indigenous Peoples, September 13, 2007. Photo: Stefan Disko

The UN General Assembly has unanimously reaffirmed the Declaration on three separate occasions, calling for full implementation at national and international levels.

Fulfilling this commitment requires meaningful and lasting changes to eliminate discriminatory laws, policies and practices and to ensure Indigenous Peoples make their own decisions about their lives and futures.

Yet, a decade after the adoption of the Declaration, Canada still lacks concrete and effective mechanisms to uphold its provisions. This is despite many positive statements from the current government committing to fully implement the Declaration.

A private members bill expected to come before the House of Commons this fall for second reading – Bill C-262 introduced by MP Romeo Saganash – contains elements of such a framework. This includes: repudiation of colonialism and doctrines of superiority; affirmation that the standards set out in the UN Declaration have application in Canadian law; and review and reform of federal legislation to ensure consistency with the minimum standards set out in the UN Declaration. In addition, the Bill requires that a national action plan be developed in partnership with Indigenous Peoples.

By approaching implementation of the Declaration through a legislative framework, there is greater assurance that crucial progress made will not be undone by a future government. Our organizations and Nations call on the federal government to embrace and build on the key elements of implementation already set out in Bill C-262.

We appreciate that full implementation of the Declaration requires long-term commitment and collaboration. As the Truth and Reconciliation Commission repeatedly reminded us, “reconciliation is going to take hard work.”

This is the time to act. Public responses to the TRC’s Calls to Action demonstrate a profound desire among Canadians to build a just relationship between Indigenous Peoples and non-Indigenous Canadians. As the TRC itself stated, the Declaration provides the framework for doing so. However, putting this framework into place requires more than fine words. It requires concrete, effective action.

The Coalition for the Human Rights of Indigenous Peoples