7th Anniversary of UN Declaration on the Rights of Indigenous Peoples 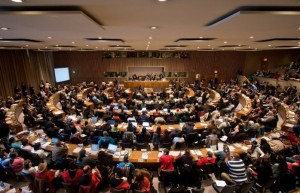 Joint Statement on the Anniversary of the UN Declaration on the Rights of Indigenous Peoples: Land and resource rights must be recognized and protected

September 13th marks the 7th anniversary of the adoption of the United Nations Declaration on the Rights of Indigenous Peoples, a consensus global human rights instrument. The Declaration calls on all states to safeguard the traditionalland and resource rights of Indigenous peoples, including legal title to lands. The Declaration also requires fair and transparent mechanisms to ensure any disputes over lands and resources are resolved in a just and timely manner.

The rights recognition and protection called for by the Declaration is increasingly reflected in decisions by Canadian courts.

For example, in a unanimous decision, Tsilhqot’in Nation v. British Columbia, the Supreme Court of Canada ruled in June that the Tsilhqot’in people in central BC continue to hold title to 1700 km2 of their traditional territory. Accordingly, they have the right to control how the land is used and to benefit from its resources.

In this landmark decision, the Supreme Court affirmed that Indigenous land title that pre-dates the arrival of Europeans in the Americas continues to exist and can be legally enforced. In the ruling, Chief Justice Beverley McLachlin pointedly stated that where unresolved Indigenous title claims exist, government and industry would be wise to obtain the consent of the Indigenous peoples, since decisions made without their consent may be overturned once title is resolved. The decision stated, “if the Crown begins a project without consent prior to Aboriginal title being established, it maybe required to cancel the project upon establishment of the title.”

Such rights to control and consent are consistent with the UN Declaration.

The UN Declaration and the Tsilhqot’in Nation decision present crucial opportunities to reframe the relationships with Indigenous peoples so that human rights are fully respected and Indigenous peoples are able to ensure the security and well-being of present and future generations. To achieve this, governments in Canada must be willing to break with the status quo that has dispossessed, marginalized and impoverished Indigenous nations, communities and families.
Our organizations call on the federal, provincial and territorial governments to affirm and uphold the rights of Indigenous peoples – as set out in the Canadian Constitution, Treaties, and international human rights law. This requires:

Almost two decades ago, the Royal Commission on Aboriginal Peoples (“RCAP”) concluded that First Nations, Inuit and Métis peoples have legitimate legal claims to a much larger land base than they currently control. RCAP warned that if Indigenous peoples “cannot obtain a greater share of the lands and resources in this country, their institutions of self-government will fail … they will be pushed to the edge of economic, cultural and political extinction.”

Affirmation of the land and resource rights of Indigenous peoples cannot be deferred for another generation. Governments in Canada must act now, with urgency and good faith. As the Supreme Court emphasized in the Tsilhqot’in decision, “What is at stake is nothing less than justice…and…reconciliation.”