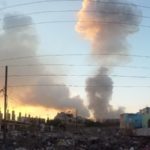 “We note with sadness that arms sales are an increasingly lucrative industry for Canada, which has become the second largest supplier of arms to the Middle East.”

So starts a new minute approved by representatives of Quaker Meetings from across Canada. The minute has been sent by Canadian Yearly Meeting to the Minister of Foreign Affairs with copies to other relevant Ministers and opposition critics. It holds that “Canada is arming countries which make a regular practice of violating basic human rights and human dignity.” The examples of Saudi Arabia and Israel are offered.

The minute goes on to state, “Today’s violence lies at the roots of violence in the future. This must end. We cannot stand by and do nothing, and we do not put our faith in Canadian weapons bringing peace.

We call on Canada not to sell arms to countries which may use these arms in violation of international law or to repress civilian populations. We call on Canada to sign and ratify the United Nations Arms Trade Treaty without further delay, and to share information about its involvement in the international arms trade in a thorough, timely, and transparent manner. As Friends, we hope Canada’s role can move from a backer of wars to a supporter of creative non-military actions to transform conflicts and build peace.”

Learn what CFSC means by a culture of peacebuilding.