Canadian Friends have long held a concern for the well-being of all in Israel/Palestine. We have expressed this through official minutes, through the tireless work of many individuals to engage in dialogue and nonviolent direct action toward a just peace, and through our support of the International Middle East Media Centre (IMEMC) which provides news from a rarely heard Palestinian perspective. We feel that only through careful and fulsome consideration of multiple perspectives and realities may we come to understand and support Israelis and Palestinians in their search for peace. We remain open to new Light in this on-going struggle. 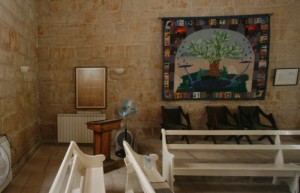 Inside Ramallah Meeting House in the West Bank. An Epistle from Ramallah Friends started multi-year discernment among Canadian Friends leading in 2014 to our support for the boycott of products made in illegal settlements. Find out more.

Steven Blaney, Canada’s Minister of Public Safety and Emergency Preparedness, in addressing the United Nations on January 22nd, 2015, noted Canada’s desire to, “advance our coordinated global effort against hatred and anti-Semitism including attempts to delegitimize Israel such as the Boycott, Divestment and Sanctions movement.” A Memorandum of Understanding (MoU) had been signed between Canada and Israel to this end on January 18th. While we certainly commend Canada’s desire to prevent anti-Semitism and other forms of hatred and discrimination in the world, we question the content of this MoU.

The Merriam-Webster Dictionary defines “anti-Semitism” as “hostility toward or discrimination against Jews as a religious, ethnic, or racial group.” Based on the text of the MoU, it appears that the Government of Canada assumes all of the following to be true:

The conclusion that the BDS movement is anti-Semitic is unjustified. It fails to acknowledge the many supporters of the BDS movement who are Jewish, and the fact that BDS is, by design, a disbursed movement with different entry points and levels of participation for different supporters. Some, like Canadian Quakers, have chosen, after careful discernment, to boycott only products made in illegal Israeli settlements. Canada’s official policy says, “As referred to in UN Security Council Resolutions 446 and 465, Israeli settlements in the occupied territories are a violation of the Fourth Geneva Convention. The settlements also constitute a serious obstacle to achieving a comprehensive, just and lasting peace.” At the same time, the Canada-Israel Free Trade Agreement (CIFTA) fails to place any restrictions on goods from the illegally occupied territories and such goods are currently sold in Canada with the inaccurate label “made in Israel”.

The recently signed MoU reaffirms that Canada and Israel both support the rule of law, but does not address the issue of Israel’s illegal occupation of Palestinian territories. Rafeef Ziadah of the BDS National Committee expressed just how problematic this is by stating that Canada, “is sending Israel the message that it can act with total impunity in violating human rights and international law.”

Far from being an expression of hatred calling into question “the State of Israel’s very right to exist or to defend itself”, as stated in the MoU, for many Palestinians and internationals, the BDS movement represents the best peaceful option available for civil society to take action to end a protracted and unbearable situation. BDS aspires to nonviolently change a greatly unequal power dynamic. In our analysis, BDS is a nonviolent attempt to draw Israel toward more constructive practices, such as recognizing the fundamental rights of the Arab-Palestinian citizens of Israel to full equality. BDS seeks only to influence Israeli practices toward ones more conducive to a just peace, which would ultimately benefit Israelis as well as Palestinians.

While it is possible that some individuals choose to boycott Israeli products due to anti-Semitism, as a movement, BDS has expressed categorical opposition to all forms of racism and discrimination, including anti-Semitism, and we are not aware of any instance where this has not been the case.

We are troubled by the limited vision of this MoU as much as by its lack of balance. The MoU names a “two states solution” apparently as the only possibility for peace. This comes at a time when we are hearing increasingly from our partners in the region, Israeli as well as Palestinian, that this is no longer viable given, among other reasons, the massive expansion of illegal Israeli settlements which have made Israel the de facto one state under which all must now live.

As Friends, we believe that there is that of God in all human beings, which can allow great creativity and positive change to emerge. We feel it more appropriate to allow room for creative alternatives, accepting that a solution, which may well not be a “two states solution”, should come from those most affected by it.

We urge the Government of Canada to reconsider this MoU and its seemingly unconditional support for the actions of the Government of Israel, even when in violation of the international law and human rights standards which Canada seeks to champion.