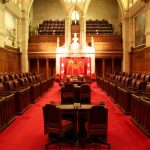 Proposed legislation crucial to reconciliation is being threatened by partisan stalling tactics in the Senate.

“This is a shameful moment for Canada,” said Grand Chief Stewart Phillip, Union of BC Indian Chiefs. “It’s profoundly troubling that a crucial opportunity to now move ahead with the urgent work of reconciliation could be jeopardized by Conservative Senators resorting to procedural dirty tricks.”

Passage of Bill C-262 would establish a legislative framework for future governments to work collaboratively with Indigenous peoples to interpret and apply the global human rights standards set out in the 2007 UN Declaration on the Rights of Indigenous Peoples.

The Truth and Reconciliation Commission called the Declaration “the framework for reconciliation” and in its Calls to Action urged the federal government to move ahead with implementation.

Last year, an overwhelming majority of Members of Parliament voted to adopt Bill C-262.  The Senate was scheduled to conclude second reading of the Bill yesterday, but a vote to move it to Committee for debate was prevented by two procedural motions and a question of privilege which interrupted Senate business and left no time to address Bill C-262.

The use of these kinds of procedural delays is deeply troubling given the small window for legislation to be passed by the Senate before the current session of Parliament ends.

“After more than two decades of deliberation in the United Nations, and more than a decade of political debate in Canada, the opportunity to finally move ahead with concrete, meaningful implementation of the UN Declaration must not be squandered by unprincipled stalling tactics,” said Grand Chief Wilton Littlechild, former Commissioner with the Truth and Reconciliation Commission.

Grand Chief Dr. Abel Bosum, Grand Council of the Crees (Eeyou Istchee), said, “For almost 40 years, the Crees have played an active role in promoting Indigenous peoples’ human rights at the United Nations. In the UN Declaration, we see the fruition of the efforts of so many Indigenous peoples and states to address some of the most important human rights concerns of our time. It is disturbing, and deeply disappointing that Conservative Senators would now resort to such undemocratic tactics in attempt to prevent Canada moving ahead with much needed implementation of these rights.”

Jennifer Preston of the Canadian Friends Service Committee said, “It’s important to remember that we’re talking about implementation of a global consensus human rights instrument that directly addresses some of the worst, most pervasive, and most persistent human rights violations experienced in Canada. The government of former Prime Minister Stephen Harper eventually came around and publicly supported the Declaration. It’s incredible that the implementation of the Declaration is now being threatened by Conservative Senators who are so opposed to Bill C-262 that they don’t even want it to be debated.”

Our organizations are calling on Conservative leader Andrew Scheer to ensure that Conservative Senators abandon these unprincipled stalling tactics so that consideration of Bill C-262 can proceed.

The Coalition for the Human Rights of Indigenous Peoples (https://www.declarationcoalition.ca)

This statement was endorsed by the following organizations and individuals:

BC Assembly of First Nations

Union of BC Indian Chiefs

For more information on implementation of the UN Declaration, please see our new factsheets at https://www.declarationcoalition.com/more-info/

In this video, long time friends and collaborators of @CommonCauseFdn, researchers Professor Greg Maio and Dr Paul Hanel, explore how people understand their own values and the values of others… https://t.co/W0mw1nD6Bt (2/16)
View on Twitter
2
0

Values are really important. They are the standards that guide and inform our opinions, decisions and behaviours. (1/16) https://t.co/3IwwvDIh7H
View on Twitter