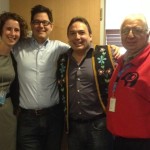 EMRIP’s commitment to monitoring the implementation of the United Nations Declaration on the Rights of Indigenous Peoples is very welcomed by our organizations. Full and effective implementation of this consensus international human rights instrument is a critical objective with both international and domestic dimensions. It is imperative that States, UN bodies and specialized agencies, in conjunction with Indigenous Peoples, engage meaningfully in this work.

There are significant achievements that we all celebrate. There are also substandard actions that serve to undermine Indigenous Peoples’ rights and the UN Declaration. Such conduct often entails the very serious challenge of “rights ritualism” – “a way of embracing the language of human rights precisely to deflect real human rights scrutiny and to avoid accountability for human rights abuses” .

We applaud the international agencies that are taking seriously their commitments to the UN Declaration. For example, the UN Development Programme (UNDP) “will not participate in a Project that violates the human rights of indigenous peoples as affirmed by Applicable Law and the United Nations Declaration”. The UNDP affirms that the “term ‘indigenous peoples’ refers to distinct collectives, regardless of the local, national and regional terms applied to them, who satisfy any of the more commonly accepted definitions of indigenous peoples.” The Food and Agriculture Organization (FAO) also applies broad criteria in relation to the term “Indigenous peoples”.

In contrast, the use of the term “peoples” was undermined at a Convention on Biological Diversity meeting in October 2014. The Conference of the Parties (COP) decided to use the term “Indigenous peoples and local communities” (instead of “Indigenous and local communities”) solely with the proviso that this change would have no legal effect whatsoever within the CBD now or in the future. Such action contradicts use of the term Indigenous “peoples” in the UN Declaration, the Outcome Document of the World Conference on Indigenous Peoples (WCIP) and other international law.

At the CBD meeting, Canada played a key role in opposing use of the term “peoples” – even though this term is enshrined in Canada’s Constitution and diverse federal legislation. States have no authority to restrict the status of Indigenous Peoples, in order to impair in any way their right to self-determination or other human rights. Such actions constitute racial discrimination.

The Truth and Reconciliation Commission of Canada (TRC) was mandated as a part of the Indian Residential Schools Settlement Agreement to inform all Canadians about what happened in Indian Residential Schools. Through the last five years, the TRC has documented the truth of survivors, families, and communities. This year the TRC held its closing ceremonies, releasing 94 Calls to Action. We take this opportunity to honour EMRIP member Chief Wilton Littlechild for his work as a Commissioner. 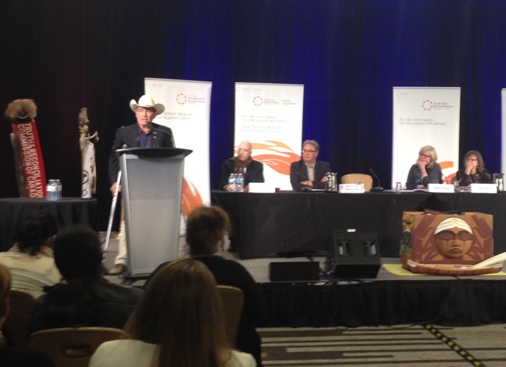 Grand Chief Wilton Littlechild speaks at the closing events of the TRC, June 2015

As underscored in the TRC’s Summary Report: “The establishment and operation of residential schools were a central element of [Canada’s Aboriginal] policy, which can best be described as ‘cultural genocide.’”

A central component of the TRC’s Calls to Action is using the UN Declaration as the “framework for reconciliation”. UN Secretary General Ban Ki-moon, who welcomed the report of the TRC, echoes this: “Truth-telling is important but not sufficient for reconciliation. I encourage all involved in this effort to follow up on the report’s recommendations, using the UN Declaration on the Rights of Indigenous Peoples as a roadmap.”

It is deeply disturbing that the government of Canada has not responded to the Calls to Action, nor made a commitment to implementing the report of the TRC. In contrast, it is reported, “the provinces have not only pledged to act on the commission’s 94 recommendations but, in some cases, have already started.”

In 2006 the government of Canada devised a confidential strategy to undermine the UN Declaration both internationally and domestically. For Canada to devise such a prejudicial strategy against the human rights of Indigenous Peoples in the same period that it signed the Indian Residential Schools Settlement Agreement is unconscionable. This ongoing strategy is highly damaging to Indigenous Peoples globally. Yet it continues to be implemented by Canada.

In contrast to the actions of the federal government, we recognize the province of Alberta who is engaging in a more constructive manner. In July of this year, the Premier of Alberta instructed her cabinet ministers to conduct a review, including budget implications, of all programs, policies and legislation that may require change based on the UN Declaration. She emphasized that her government will work with Indigenous Peoples as true partners to ensure their constitutional rights are protected. 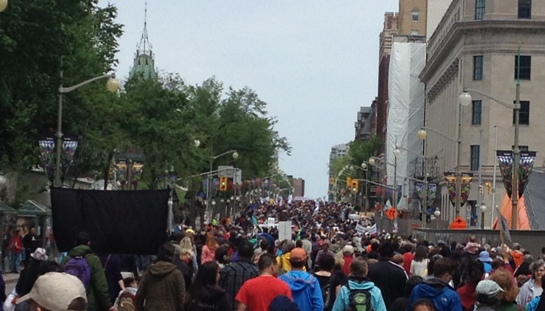 In March 2015 a member of the official opposition in Canada introduced legislation, Bill C-641 – United Nations Declaration on the Rights of Indigenous Peoples Act. The Bill proposed that the government, in consultation and cooperation with Indigenous Peoples, take all measures necessary to ensure that the laws of Canada are consistent with the UN Declaration. This conforms to the following commitment in the WCIP Outcome Document:

We commit ourselves to taking, in consultation and cooperation with indigenous peoples, appropriate measures at the national level, including legislative, policy and administrative measures, to achieve the ends of the Declaration and to promote awareness of it among all sectors of society….

This is also consistent with the commitment of Canada’s Prime Minister in 2012: “And, of course, we endorsed the United Nations Declaration on the Rights of Indigenous Peoples. This reaffirms our aspiration and our determination to promote and protect the rights of indigenous people at home and abroad.”

However, the government rejected Bill C-641, claiming, “this proposal is simply impossible to support…” The central objection of Canada is article 19 of the Declaration and “free, prior and informed consent” (FPIC). Canada states that article 19 “would provide first nations with a veto over any sort of legislation or development that concerns them”.

Government statements follow a pattern when addressing the rights of Indigenous Peoples. While claiming to support Aboriginal rights, the rhetoric is designed to alarm the public. Little regard is accorded to accuracy or justice.

The term veto is not used in the UN Declaration. Veto implies an absolute right or power to reject a law or development that concerns Indigenous peoples, regardless of the facts and law. No balancing of rights would occur. No considerations of the rights of others or justice or non-discrimination or good governance would be permitted. Canada then further builds on this imagined frenzy of absolute power and declares: “it would be irresponsible to give any one group in Canada a veto”. 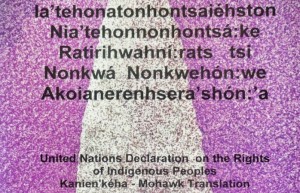 The government has failed to consider the landmark decision of the Supreme Court of Canada in Tsilhqot’in Nation. The Court repeatedly referred to the constitutional right of Aboriginal title-holders to give or withhold consent. Such title-holders have the right to use and control the land and enjoy its benefits. Such right to control “means that governments and others seeking to use the land must obtain the consent of the Aboriginal title holders” (para. 76).

In Tsilhqot’in Nation, the Supreme Court ruled that, in the absence of Aboriginal consent, “legislation may be rendered inapplicable going forward to the extent that it unjustifiably infringes Aboriginal title.” (para. 92)

At the Committee on World Food Security in Rome last October, Canada would not accept a reference to FPIC without inserting a formal explanation of position in the consensus Report: “Canada interprets FPIC as calling for a process of meaningful consultation with indigenous peoples on issues of concern to them”. Such a view contradicts the Supreme Court’s rulings that explicitly refer to “consent”.

In Tsilhqot’in Nation the Supreme Court highlighted Indigenous “consent” in 9 paragraphs; the “right to control” the land in 11 paras.; and the “right to determine” land uses in 2 paras. The Court added that the “right to control” means that the governments and others seeking to use the land must obtain the consent of the Aboriginal title holders unless stringent infringement tests are met. Moreover, the Court ruled, “incursions on Aboriginal title cannot be justified if they would substantially deprive future generations of the benefit of the land.”

“Consent” is not limited to Aboriginal title and applies to other Aboriginal rights. As described in 2004 by the Supreme Court in Haida Nation v. British Columbia (Minister of Forests), the high end of the spectrum of consultation requires “‘full consent of [the] aboriginal nation’ on very serious issues.”

It is disturbing that the government of Canada claims to uphold the rights of Aboriginal peoples, but ignores key rulings of Canada’s highest court. 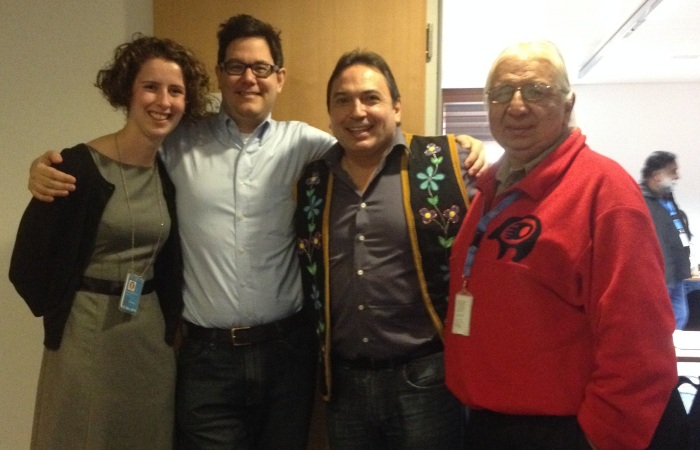 1. THAT EMRIP, through the Human Rights Council, encourage UN treaty bodies and mechanisms, as well as the Universal Periodic Review process, to scrutinize the reports and human rights record of States, so as to effectively address rights ritualism. This should include ensuring that State claims are systemically compared to the concerns raised by Indigenous Peoples and civil society.

3. THAT EMRIP, through the Human Rights Council, urge States to ensure that commitments and obligations are not violated in other international forums, as has occurred at the Convention on Biological Diversity meeting following the World Conference on Indigenous Peoples.

4. THAT EMRIP, through the Human Rights Council, urge States, in conjunction with Indigenous Peoples, to develop legislation at the national level to ensure that laws are consistent with the UN Declaration. Each State has a prime responsibility and duty to protect, promote and implement all human rights, consistent with the Charter of the United Nations and international human rights law.

For end notes please download this joint statement in PDF.

Learn more about CFSC’s work in support of Indigenous rights.