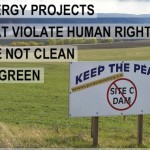 Public Event
Honouring the Treaties: The Site C dam, the destruction of a valley, and the Trudeau government

Background:
Helen Knott is a member of the Prophet River First Nation in northeastern BC and granddaughter of Chief Bigfoot, the last signatory to Treaty 8. She is on her way to Ottawa to deliver a message for Prime Minister Justin Trudeau:

“I am trying to honour my Grandfather’s original intent and uphold those rights he meant to protect. I ask Prime Minister Trudeau to honour his own commitment to treaty rights, If he truly wants to build a new relationship based on respect for our rights, he need to act immediately to withdraw all federal support to the flooding of our land by the Site C dam.”

The $9 billion Site C dam is one of the largest resource development projects underway anywhere in Canada. The project was approved by the federal and provincial governments even though a joint environmental impact assessment concluded it would cause permanent harm to the ability of First Nations to use their traditional lands, rights that are protected under Treaty 8. The federal and provincial governments failed to determine whether these infringements of Treaty rights were legally justifiable.

Despite legal challenges that are still before the courts, BC Hydro has already clearcut a vast swath of the Peace Valley in preparation for the dam. The Treaty 8 Stewards of the Land, a grassroots movement of First Nations community members and local landowners, are currently facing the threat of a punitive lawsuit and possible arrest because a cultural camp they have organized at the historic Rocky Mountain Fort site in the Peace Valley stands in the way of further logging.