Open Letter to All Senators

Our Nations and organizations urge all Senators to support Bill C-262, a private members bill to ensure that the federal government implements the United Nations Declaration on the Rights of Indigenous Peoples.

The Truth and Reconciliation Commission of Canada called the UN Declaration “the framework for reconciliation at all levels and across all sectors of Canadian society.” In its Calls to Action, the TRC urged the federal government to fully implement this global, consensus instrument for the protection and realization of the human rights of Indigenous peoples.

Bill C-262 provides a principled and pragmatic framework for achieving this goal.

Passage of Bill C-262 will establish a legislative framework requiring the federal government to work in consultation and cooperation with First Nations, Inuit and Métis peoples to develop a national action plan for implementation of the Declaration. The Bill also includes a collaborative process to reform federal laws and policies, and to report regularly to Parliament on the progress made.

This Bill deserves the support of all Senators.

The UN Declaration was developed through more than two decades of deliberations among states and Indigenous peoples, in which the Government of Canada was an active and influential participant. The Declaration became universally applicable as the minimum global standards for the “survival, dignity and well-being” of Indigenous peoples when it was adopted by the UN General Assembly more than a decade ago on September 13th, 2007.

To date, the UN General Assembly has reaffirmed the Declaration eight times by consensus. It has repeatedly called for the full implementation of the Declaration, including in the Outcome Document of the 2014 UN World Conference on Indigenous Peoples.

Although Canada initially voted against the Declaration, the federal government first endorsed it in a formal statement in 2010 under Prime Minister Stephen Harper. At that time, he declared “we are now confident that Canada can interpret the principles expressed in the Declaration in a manner that is consistent with our Constitution and legal framework”.

UN Treaty bodies, the independent expert groups responsible for promoting state compliance with binding international conventions like the Convention on the Elimination of Racial Discrimination, have repeatedly called on Canada to fulfil its human rights obligations by implementing the Declaration.

Bill C-262 was passed by the House of Commons with the support of the overwhelming majority of Members of Parliament. 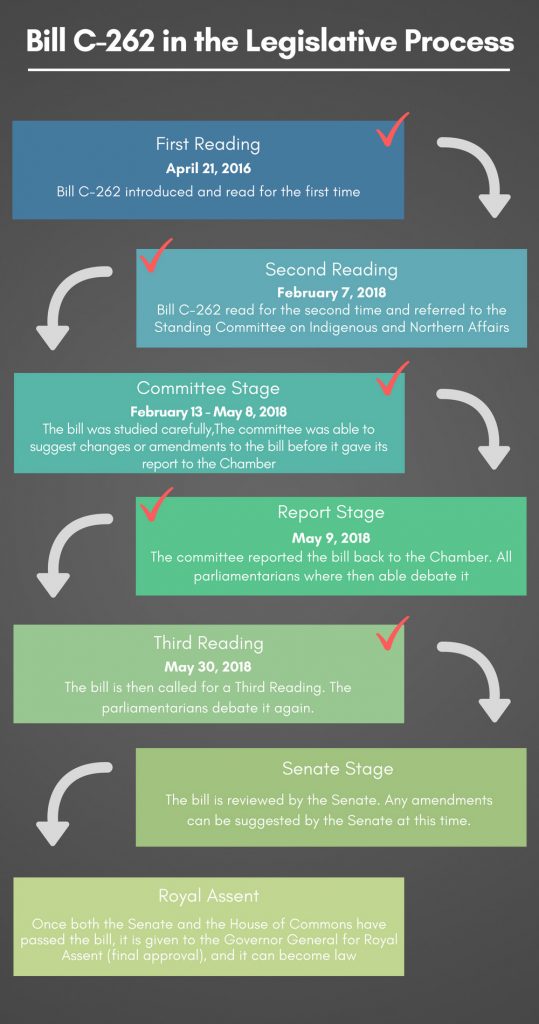 Currently, Senators have before them a crucial choice. What is at stake is not just the passage of Bill C-262, but the positive message that Canada is ready to embrace the path of genuine reconciliation in partnership with Indigenous peoples.

The Coalition for the Human Rights of Indigenous Peoples (www.declarationcoalition.ca)
This Open Letter was endorsed by the following Nations, organizations and individuals:

For more information on implementation of the UN Declaration, please see our new fact sheets.