Thank you for the opportunity to address this agenda item on the UN Declaration on the Rights of Indigenous Peoples.

Our organizations strongly support the efforts of States, in consultation and cooperation with Indigenous peoples, to achieve best practices in implementing this consensus international human rights instrument. In this context, we emphasize the importance of harmonious and cooperative relations that respect Indigenous peoples’ right to self-determination and related State obligations.

As affirmed in article 43 of the Declaration, States have an obligation to “promote respect for and full application of the provisions of this Declaration” and follow up its effectiveness. Under the Charter of the United Nations, member States have a solemn commitment to promote “universal respect for, and observance of, human rights … for all without distinction”.[1]
The UN system has emphasized the significance of the UN Declaration and the urgent need for full and effective implementation. Indeed, the UN High Commissioner for Human Rights has affirmed: “The rights of indigenous peoples have remained a priority for the OHCHR and, in pursuing this priority, the Declaration on the Rights of Indigenous Peoples was the Office’s key reference and framework for action.”[2]
The International Law Association concluded in 2010 that the UN Declaration is “a declaration deserving of utmost respect”.[3] This position is consistent with a 1962 opinion from the UN Office of Legal Affairs that provides: “in United Nations practice, a ‘declaration’ is a solemn instrument resorted to only in very rare cases relating to matters of major and lasting importance where maximum compliance is expected”.[4]
We are concerned that some States continue to minimize the legal status and effects of the Declaration. A recent troubling example from Canada occurred when the federal Minister for Aboriginal Affairs was reported in the Montreal Gazette as saying “the UN Declaration is an ‘aspirational document’ that doesn’t affect the government’s treaty and aboriginal rights obligations under the Constitution.”[5]
This statement is false. The Supreme Court of Canada ruled in 1987 that declarations and other international human rights instruments are “relevant and persuasive sources” for the interpretation of human rights in Canada.[6]
In 2012 Canada’s Federal Court ruled that the UN Declaration may “inform the contextual approach to statutory interpretation”.[7] In its own factum to the Court, Canada indicated that the UN Declaration “may provide legal context that is of assistance in interpreting domestic legislation”.

Also in 2012, the Canadian government conceded to the UN Committee on the Elimination of Racial Discrimination (CERD) that: “Canadian courts could consult international law sources when interpreting Canadian laws, including the Constitution.”[8]
In their concluding observations to Canada, CERD stated: “The Committee requests that the State party, in consultation with indigenous peoples, consider elaborating and adopting a national plan of action in order to implement the United Nations Declaration on the rights of indigenous peoples.”[9]
States cannot avoid Indigenous peoples’ human rights and related State obligations in the UN Declaration, by attempting to diminish its legal significance. Genuine reconciliation and good governance are not possible, if States attempt to undermine the UN Declaration and fail to respect and protect Indigenous peoples’ human rights.

The objective of Indigenous peoples and States in the decades of development was not to attain a solely aspirational instrument. The text consistently uses the term “shall” (not “should”) in elaborating State obligations, in relation to Indigenous peoples’ inherent rights. The Declaration requires legislative and other measures to achieve its ends, as well as “effective remedies” for all infringements of collective and individual rights.

The Declaration is a blueprint for achieving justice, reconciliation and renewed hope. It is a pathway to harmonious and cooperative relations between Indigenous peoples and States. The survival, dignity, security and well-being of all Indigenous peoples must be ensured.

1. We respectfully suggest that EMRIP should recommend that the Human Rights Council remind States to embrace a human rights-based approach in regard to the United Nations Declaration on the Rights of Indigenous Peoples.

2. States, in conjunction with Indigenous peoples, should develop national action plans for full and effective implementation of the UN Declaration.

3. EMRIP should recommend to the HRC that States abandon any strategies or actions that serve to undermine the legal status and effects of the UN Declaration. As affirmed by UN treaty bodies and mechanisms, as well as regional human rights bodies and domestic courts, the UN Declaration has diverse legal effects.

[8] Committee on the Elimination of Racial Discrimination, “Consideration of reports, comments and information submitted by States parties under article 9 of the Convention (continued): Nineteenth and twentieth periodic reports of Canada (continued)”, Summary record of 1242nd meeting on 23 February 2012, UN Doc. CERD/C/SR.2142 (2 March 2012), para. 39.

[9] Concluding observations of the Committee on the Elimination of Racial Discrimination: Canada, March 2012. 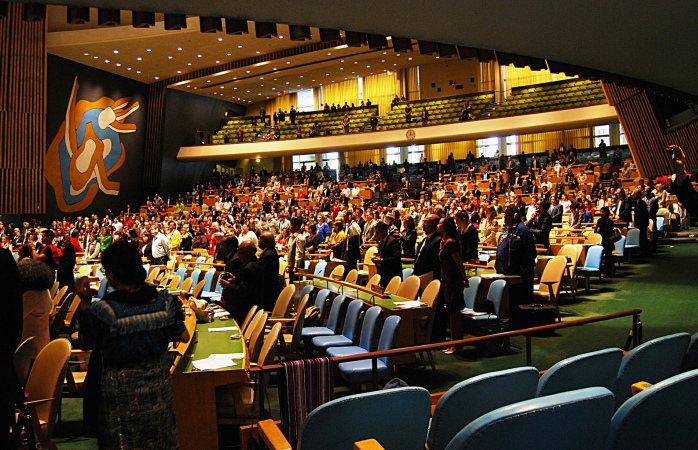