Quakers in Peterborough, Ontario joined other community members to form the Peterborough Peace Council. There has been a monthly Monday evening vigil for a couple of years now. This year, with the Treaty on the Prohibition of Nuclear Weapons having passed, the usual Hiroshima Day activities took on new significance in reaching out to the broader community.

August 6th, a perfect day for outdoor events, saw a good turn-out for the community potluck picnic to celebrate the new Treaty on the Prohibition of Nuclear Weapons. Picnickers heard blessings from Anishinaabeg, Muslim, Buddhist, Christian, and Jewish traditions, and learned about the work of Food not Bombs, which provides a free meal every Monday evening in the park across from Peterborough City Hall. 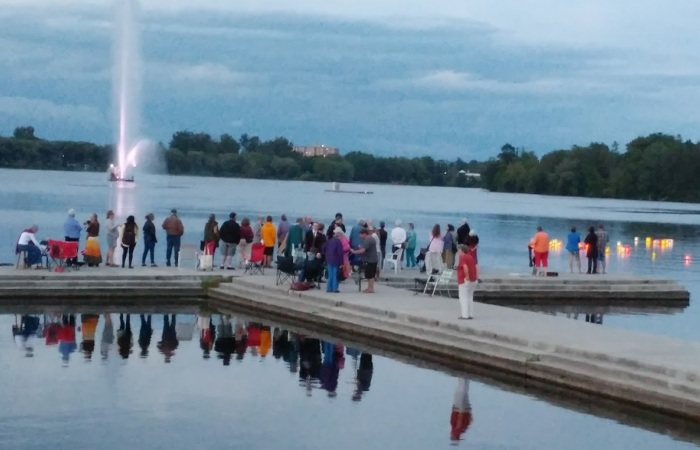 Participants watch the lanterns that they launched, commemorating the spirits of those who died due to nuclear weapons. Photo: Julie Stoneberg


In the evening, 62 people participated in the lantern ceremony to commemorate the victims of the bombing of Hiroshima and Nagasaki, and all the victims of the manufacture and storage of these heinous weapons. Speakers from Peterborough Ploughshares and the Peterborough Peace Council explained the role of militarism in the crises of our times, including climate change.

People shared prayers and songs, and 55 people signed a letter to the federal government asking that Canada, which had not participated in the new Treaty, engage constructively in nuclear disarmament, and noting that in 1999, Canada moved NATO to review its nuclear policy. NATO’s resulting agreement to move in the direction of disarmament was not subsequently implemented. The new Treaty proves that the vision of a nuclear weapons free world is rational, essential, overwhelmingly popular, and achievable!

Find out more about what we mean by a culture of peacebuilding.