The Ontario government must end its intimidation of Palestinian rights advocacy

The following is a joint statement signed by CFSC and many other organizations. Learn more about our work for a just peace in Israel/Palestine and read Frequently Asked Questions about our support for a boycott of the products of illegal Israeli settlements.

We, the undersigned organizations, call on the Ontario government to immediately refrain from defaming and condemning Ontario human rights activists who work in solidarity with the Palestinian people.

In 2005, after the International Court of Justice ruling that found Israel’s barrier jutting into the occupied West Bank to be illegal, 171 Palestinian organizations, representing a broad segment of Palestinian civil society, called upon the international community to adopt the tactics of boycotts, divestments and sanctions until Israel

Each of these demands correspond closely to Canada’s official governmental policies, as are stipulated on the Global Affairs website. These demands are based on basic principles of international law. 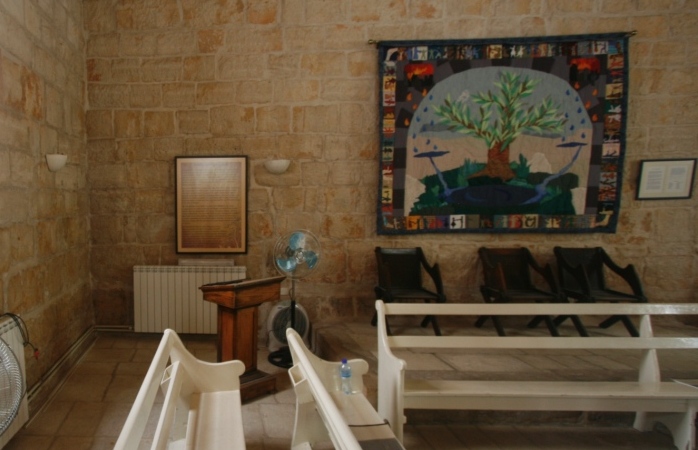 Inside Ramallah Meeting House in the West Bank. An Epistle from Ramallah Friends started a multi-year process of discernment among Canadian Friends. In 2014 we reached unity in the spirit to boycott products made in illegal Israeli settlements.


Nonetheless, the recently defeated Bill 202 claimed that the Boycott, Divestment, and Sanctions (BDS) movement is “anti-Semitic”, “anti-Jewish” and “anti-Israeli”, and that BDS targets Jewish-owned businesses. In reality, BDS targets Israeli institutions, not individuals, and focuses on corporations—be they Israeli or otherwise—which contribute to Israel’s ongoing violations of international law. While it is encouraging that this bill was resoundingly defeated, neither Premier Wynne, nor her governmental counterparts, refuted these baseless allegations put forward by the Ontario PC Party, Liberal MPP Mike Colle, and Canadian Friends of the Simon Wiesenthal Center for Holocaust Studies.

Furthermore, on June 2nd, Premier Wynne stated in the Ontario Legislature that during her recent mission to Israel and occupied Palestinian territories—upon the invitation of a pro-Israel lobby group—she proclaimed her commitment to “work with the opposition parties and that we would try to come up with a motion that would pass in this legislature that would reflect the inclusiveness of all the members of this legislature… in the coming weeks.”

All of us are in favour of “inclusiveness,” but let us not allow this noble sentiment to become a cover for an attack on legitimate political speech.

Premier Wynne has noted her position on the BDS movement, stating, “I entirely oppose the BDS movement. In fact, any position that promotes or encourages anti-Semitism in any way – we have to stand against that.” Rather than denounce the defamatory lies that were promoted in our provincial legislature, Wynne has given credence to them.

Support for BDS is a legitimate political position, as it is based on solidarity with the Palestinian people’s struggle for freedom, justice and equality. It has been endorsed by numerous Jewish-Israelis, Jews and Jewish organizations in different countries, and by an impressive list of individuals including Stephen Hawking, Desmond Tutu and Alice Walker.

We ask that the Ontario Legislature support the right of Ontarians to engage in peaceful advocacy for human rights in Israel/Palestine, free from defamation or condemnation from our provincial government.