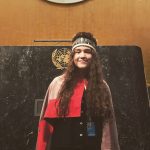 We’re still at the UN Permanent Forum on Indigenous Issues in New York. The Coalition on the Human Rights of Indigenous Peoples made the following joint statement:

Joint Statement of Coalition for the Human Rights of Indigenous Peoples

Respected women, respected men, good people, My name is Haana Edenshaw, from the Tsiits gitanee clan from Haida Gwaii. I thank all of you for listening.

I am 15 years old and have the honour of delivering this statement on behalf of the Coalition for the Human Rights of Indigenous Peoples.

I would like to begin by highlighting that my own nation, the Haida Nation, proudly asserts the right to sustainable development in our land and marine areas. For example, the Haida Nation and the government of Canada entered into agreement in 2010 and affirmed in 2018 the following:

… the Gwaii Haanas Marine Area shall be regarded with the highest degree of respect and will be managed in an ecologically sustainable manner that meets the needs of present and future generations, without compromising the structure and function of the ecosystems …

In regard to sustainable development, the most significant international instrument is Transforming Our World: The 2030 Agenda for Sustainable Development. To date, it has been reaffirmed by the UN General Assembly by consensus at least 41 times. In particular, States resolved:

between now and 2030, to end poverty and hunger everywhere; to combat inequalities … to protect human rights and promote gender equality and the empowerment of women and girls; and to ensure the lasting protection of the planet and its natural resources.

States added: “we pledge that no one will be left behind. … And we will endeavour to reach the furthest behind first.” In December 2015, the General Assembly stressed by consensus “the need to ensure that no one is left behind, including indigenous peoples, who will benefit from and participate in the implementation of the 2030 Agenda”.

Yet, too often, Indigenous peoples in all regions of the world are faced with developments that are not sustainable and that fail to meet international standards. Too often, States are not including any references to the 2030 Agenda on Sustainable Development in their domestic laws.

Further, in the 2018 Special Report of the Intergovernmental Panel on Climate Change, entitled Global warming of 1.5°C, it is emphasized that the “avoided climate change impacts on sustainable development, eradication of poverty and reducing inequalities would be greater if global warming were limited to 1.5°C rather than 2°C”.

Madam Chair, the UN Declaration on the Rights of Indigenous Peoples affirms our right to sustainable development when read as a whole. Article 20 affirms the right of Indigenous peoples “to be secure in the enjoyment of their own means of … development”. Articles 23 and 32 affirm our right to determine our own priorities for development. These rights are all reinforced by our core right to self-determination.

In September 2015, in relation to Indigenous peoples in Colombia, the UN Committee on the Elimination of Racial Discrimination emphasized the “fundamental right to free, prior and informed consent and their right to sustainable development”. Further, the American Declaration on the Rights of Indigenous Peoples reaffirms the right of Indigenous peoples to “conserve, restore, and protect the environment and to manage their lands, territories and resources in a sustainable way.”

In conclusion, the Coalition strongly urges the UN Permanent Forum to adopt the following positions:

We respect you, join us in respecting nature.

Learn more about the human rights of Indigenous Peoples.