The following open letter was sent today. Download it in PDF to read a list of signatories.

We are writing with respect to Canada’s recent examination under the UN Human Rights Council’s Universal Periodic Review (UPR) process, the outcome of which – providing a compilation of 275 recommendations made to Canada by 107 states – was tabled at the Council today. We are writing this Open Letter at this time to urge that the government engage in a meaningful dialogue with Indigenous Peoples’ organizations and civil society groups and accessibly engage the public over the coming four months, before reporting back to the UN Human Rights Council in September indicating which of the recommendations Canada is prepared to accept.

The recommendations touch on a wide-range of pressing concerns that have been identified by our organizations and other Indigenous and civil society groups for many years and simply cannot continue to be overlooked or dismissed, including: gender-based violence, violence and discrimination against Indigenous women, girls and individuals identifying as LGBTIQ2S, the land rights of Indigenous Peoples, inequality in the provision of essential services to Indigenous Peoples and children in particular, the rights of persons with disabilities, access to justice for economic and social rights, sexual and reproductive rights, housing, nutrition, poverty, access to health care, systemic racism, religious discrimination, protecting the rights of refugees and migrants, the human rights responsibilities of businesses, the rights of children and a number of important UN and other human rights treaties not yet ratified by Canada. 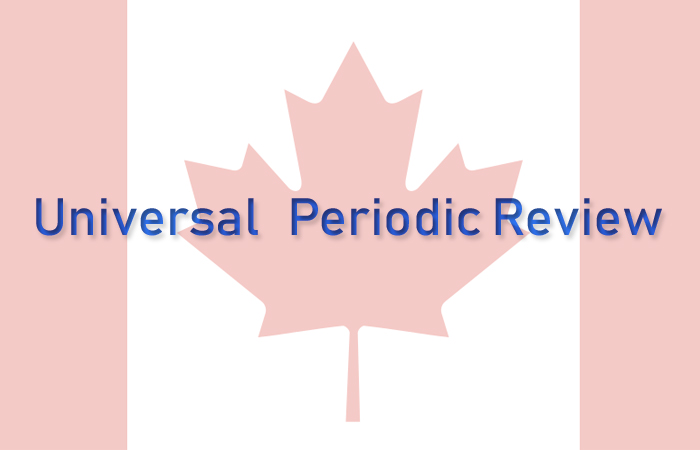 Our organizations have all engaged extensively in the lead up to the review, including providing written submissions, participating in consultations with the government, presenting at briefings in Geneva, meeting widely with other governments and attending the actual review on May 11th. We have devoted such considerable time and attention because we are strong supporters of the UPR process. It offers a valuable opportunity for Canada to engage with other governments and with Indigenous organizations and civil society groups in the country in a constructive process that can and should play a valuable role in addressing longstanding human rights concerns in the country. And by taking the review seriously, including meaningful commitments and action to implement the outcome, Canada can set a model for other governments to follow and thus strengthens the UPR as an important avenue for international human rights protection more widely.

We welcomed the fact that Canada’s delegation was led by Minister Wilson-Raybould, the first time a Minister has headed Canada’s UPR team. We welcome as well the voluntary commitments that were made at the outset of the presentation on May 11th. Building on that demonstration of leadership, this is a particularly opportune time for the government to improve and strengthen its approach to following up on the UPR outcome. Traditionally, Canada’s response to human rights recommendations arising through such processes as the UPR, reviews conducted by UN treaty monitoring committees and Special Rapporteurs and other international and regional human rights experts and bodies, has been problematic and disappointing. Due to a lack of effective federal/provincial/territorial coordination, no clear political responsibility and accountability for implementation, and a significant deficit with respect to transparency and public accessibility to the decision-making processes, international human rights recommendations made to Canada have in large part languished. In fact, international human rights bodies have frequently and impatiently felt compelled to press Canada to take steps to better ensure that their recommendations will be effectively implemented.

The decision to convene the long overdue federal/provincial/territorial ministerial meeting on human rights in December, 2017 signalled your government’s recognition that the country’s outdated and weak approach to implementing international human rights obligations needs to be modernized and significantly strengthened. As you are aware, at that meeting federal, provincial and territorial governments committed to take a number of steps to address that concern. The approach taken to the outcome of this most recent UPR provides a crucial test and offers a tremendous opening to do just that.

We note three other pressing and timely reasons for the government to markedly ‘up its game’ in the follow up to this UPR, the third such review of Canada’s human rights record.

Ministers, important work lies ahead in reviewing the many recommendations made by states and considering which should be accepted and thus shape Canada’s national human rights agenda for the coming four to five years. That is a vital responsibility that cannot be left only to governments. There must be meaningful opportunities for timely engagement with Indigenous Peoples’ organizations and civil society groups, as well as input from the public. Those arrangements need to be made without delay, as time will be short, particularly over the summer months.

We call on you to work quickly and closely with Indigenous Peoples governments and organizations and civil society groups, as well as provincial/territorial governments to develop plans for providing publicly accessible information about the UPR outcomes and instituting regular meetings and other means of consultation over the course of implementation of these recommendations (2018-2022). People and communities across the country must have a say in how their governments decide to move forward in improving protection of their rights.