On this, International Conscientious Objectors Day (May 15th), The Canadian Council of Churches’ Commission on Justice and Peace has released a letter that it wrote to the Jason Kenney, the Minister of Minister of Citizenship, Immigration and Multiculturalism asking “the Government of Canada to either allow the US war resisters to stay in Canada on humanitarian and compassionate grounds or to create a mechanism, perhaps a revision of Bill C-440 that would enable them to apply for status from within Canada.”

Hand-delivered to the Minister’s office this morning by members of the Council’s Commission on Justice and Peace, the Council’s letter (English, French) comes out firmly in support of rights of conscience, specifically conscientious objection to military service and war: “As churches, rights of conscience and religion hold a particular significance for us as we seek to encourage people to live faithful lives. We are of the opinion that when they have followed their conscience in the decision they made to refuse to serve in war and to come to Canada then their circumstances warrant humanitarian and compassionate relief. Their beliefs are protected under domestic and international law, and facilitating their punishment by returning them to the United States, in our opinion, is regrettable.” 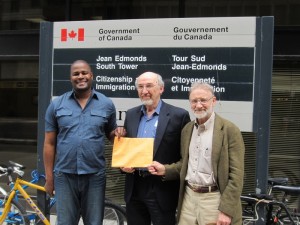 The letter gave particular attention to the controversial Operational Bulletin 202, a directive to immigration staff regarding handling of military deserters who seek entry to Canada: “The first paragraph of the directive implies that military deserters from other countries who are seeking refugee protection in Canada may also be serious criminals and therefore inadmissible to Canada, as desertion is a serious crime in some countries. When this effort to discourage military personnel prevents them from exercising conscientious objection rights guaranteed in the UN Handbook for Refugees then this is not in accord with respect to Canada’s adherence to the norms of universal human rights.”  Canadian Yearly Meeting (the national church body of Friends in Canada) is a member of the Canadian Council of Churches.

The secular War Resisters Support Campaign has also made this year’s International CO Day a Day of Action. They are asking for supporters of conscientious objectors “to send a message to the Minister of Citizenship, Immigration and Multiculturalism, Jason Kenney, to demand that he rescind Operational Bulletin 202 and respect the rights of conscientious objectors to the Iraq War”.  Several church members of the Council (or church-related agencies of Council members) support the WRSC’s Declaration of support for the US war resisters, including Quakers, Mennonite Central Committee Canada, and The United Church of Canada.