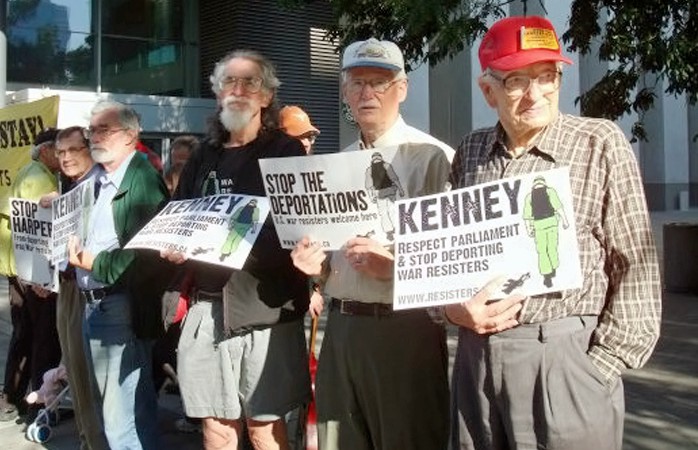 Protesting for justice—a longstanding Quaker tradition. Pictured: Rally in support of a US war resister in front of the Federal Court, 2010.

In 1947, the Religious Society of Friends (Quakers) received the Nobel Peace Prize for service work done during war. All of the Quaker Service Committees' work is honoured by the Prize and the ethics that garnered it continue to inform our work today.

Interested in hearing more about the history of our work from Friends who have first-hand knowledge and experience? Check out our Get to Know Thee, Friend series to hear stories of CFSC’s work and the Friends who have made it possible. 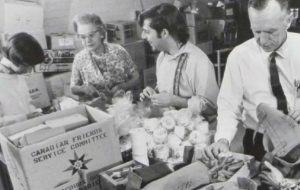 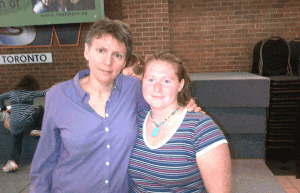 Throughout the decades we have continued to develop and refine our understanding of peacebuilding and how Canada can contribute constructively to making our world more peaceful. We've called for a federal department with a focus on researching and developing effective peacebuilding strategies. 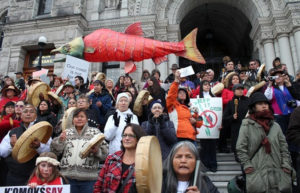 In the 1990s and 2000s, CFSC worked with many Indigenous partners and human rights organizations to encourage governments to develop the UN Declaration on the Rights of Indigenous Peoples. This work involved a great deal of coordination with partners and travel to meet with UN delegates from different countries. The UN adopted the Declaration in 2007. Several organizations, including CFSC, that worked together toward the adoption of the Declaration are now part of the Coalition for the Human Rights of Indigenous Peoples, which seeks the full implementation of the UN Declaration in Canada. This focus has seen CFSC participating in UN meetings in New York and Geneva and doing a great deal of educational work about the Declaration, both for the general public and for key decision makers.

We have been involved in particular court cases such as intervening at the Supreme Court of Canada in the landmark Tsilhqot’in Nation title case. We have also actively been involved with supporting Quakers to do the difficult work toward reconciliation. 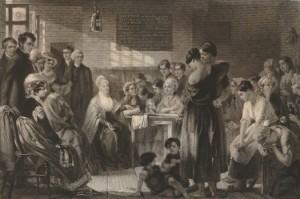 In 1981, the Religious Society of Friends became the first religious body to endorse an end to prisons (PDF) while recognizing "a need for restraint of those few who are exhibiting dangerous behaviour" but calling for this restraint to be humane. The work of CFSC and Ruth Morris also led to the establishment in 1982 of the International Conference on Prison Abolition, now called the International Conference on Penal Abolition. 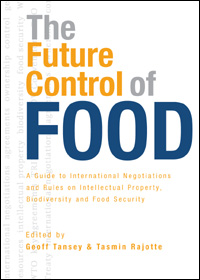 You can also read this brief summary of CFSC's history (PDF), written in 2007.