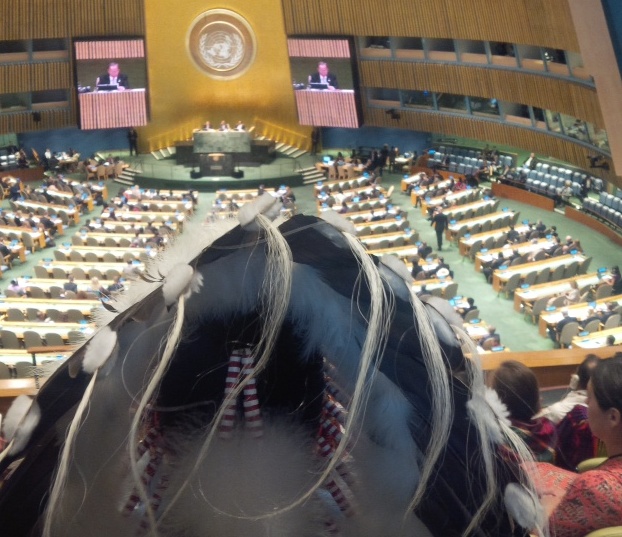 The UN Declaration on the Rights of Indigenous Peoples is the most comprehensive international human rights instrument to specifically address the economic, social, cultural, political, civil, spiritual, and environmental rights of Indigenous peoples.

In its own words, the UN Declaration sets out minimum standards necessary for the “dignity, survival and well-being” of Indigenous peoples.

The UN General Assembly overwhelmingly adopted the Declaration on September 13, 2007. This historic adoption followed more than 20 years of deliberation and debate in which Indigenous peoples worked directly with states to elaborate upon and advance their human rights!

The Truth and Reconciliation Commission of Canada called the UN Declaration “the framework for reconciliation.”

Learn about the Declaration

Canadian Friends Service Committee is an active part of the Coalition for the Human Rights of Indigenous Peoples, which has put together many excellent resources about what the UN Declaration is and is not.

You can also see our most recent public statements about implementing the UN Declaration.

In the video below, shot in 2008, a few months after the UN had adopted the Declaration, CFSC’s Indigenous Rights Program Coordinator Jennifer Preston tells the behind-the-scenes story of the negotiation process that led its adoption and how it was almost stalled at the last minute:

Get your copy of the Declaration

Want to learn more about Quakers and how service work plays a role in our faith? Join CFSC tonight for a conversation with Vince Zelazny, Associate Clerk of CFSC.

Learn more and register for our Get to Know Thee, Friend series here: https://t.co/mrAEnwBoQ7 https://t.co/1DmA3gHdRj
View on Twitter

A new series of the free workshops based on Are We Done Fighting? start next Tuesday 2 March at 15:30 GMT / 16:30 CET / 17:30 EET. Details below. You will need to buy the (paper or electronic or audio) book and a regular commitment is required. https://t.co/QFCww6utYQ
View on Twitter
4
0
Follow @CFSCQuakers

This is what we fought for: An open letter in supp

A Friendly reminder to join us on Thursday, Februa

Canadian Friends Service Committee is part of a co