War is learned… it is a social invention like writing or marriage, and should be viewed as distinct from interpersonal violence and aggression, which have evolutionary/biological roots. At certain times societies believe that their history proposes that war is the right response to a particular set of circumstances. It seems to follow that if we can change that perception of tradition, the likelihood of war would be diminished. 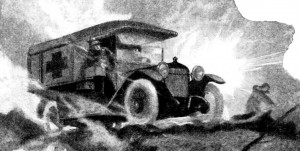 Canadian Quakers, like so many others in Canada and around the world, do not see war as a cause for celebration.

From 2014-2018 much attention will be placed on commemorating World War I and World War II. Friends from across Canada are gearing up to host events in remembrance of the horrific and avoidable tragedies that these wars were. We seek to respect the lives of all that were lost due to war, as well as those who conscientiously objected to participating in these wars, and all those who worked for peace in a myriad of ways prior to, during, and following them.

Canadian Friends Service Committee believes that these anniversaries should be taken up by faith groups, the public, the media, and various levels of government in Canada as an opportunity to ask questions that address root causes of war. We must establish a culture of peace and ensure genuine investment in the on-going work that peace requires. Here are just a few of the queries we think Canadians should be reflecting on in the process of commemorating war: 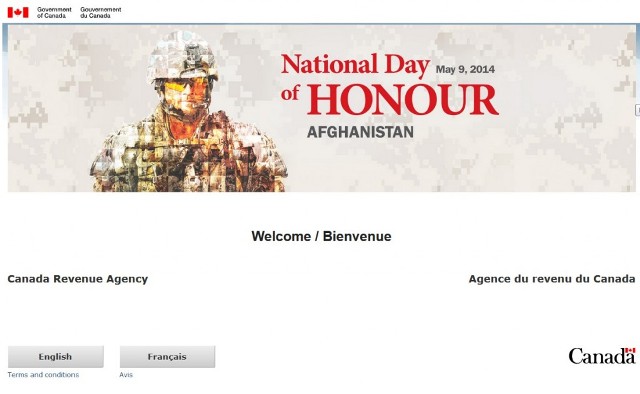 How are ads like the above (seen on federal government websites like the Canada Revenue Agency May 6th, 2014) intended to influence Canadians?

We invite Meetings from across Canada to share their thoughts, research, articles, letters to local news outlets, and events being planned. We will post information as it comes in and hope that together, we may continue to work for a peaceful and just world.

Further resources on the commemoration of war

The Summer 2014 issue of Quaker Concern has an interview with Canadian Friend and historian Jo Vellacott about WWI, militarism and pacifism.

An overview of periodicals from WWI that are in the library at Friends House in London, England (this post includes an interesting look inside many of these publications).

Northern Friends Peace Board (a British Quaker Agency) will be posting information and resources on their website. 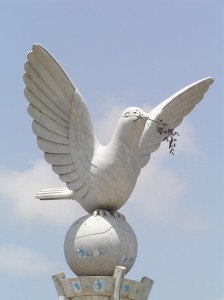 PeaceQuest is a hub which shares resources and operates with the support of groups from across Canada, including Friends. Find upcoming PeaceQuest events.

Canadian Peace Congress is engaged in activities around the commemoration of WWI.

The template of a white poppy (PDF) you can print and wear. 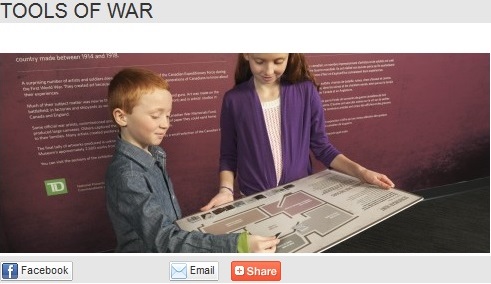 This picture was shared by the Canadian War Museum with the caption: “Canadians used a wide variety of tools and equipment during the First World War – from tanks to planes, shells to artillery. Here’s your chance to find them all! Pick up this fun, family-friendly scavenger hunt…”What do we want young people to know about war and peace?

What activities contribute to that learning?

Of historical interest – Friends from Coldstream Monthly Meeting wrote this short pamphlet (PDF) during World War I (1916), calling on Canada to establish a body similar to the United Nations – a “worldwide federation” with a mandate of promoting international cooperation, disarmament, and peace.

The pamphlet urges, “Now is the time to forestall the next war. Now is the time for wise and far-reaching preventive measures.” If only this call had been headed! While much of the language in the pamphlet is very different from what we would use today, many of the ideas about justice and peace are similar to ones Canadian Quakers still hold (see some modern statements from Canadian Yearly Meeting).

Halifax Monthly Meeting used the occassion of its 50th anniversary to highlight its role in supporting war resisters and bringing an end to the Vietnam war. Read a one page summary (PDF) with a link to 8 minutes of audio from the event, recorded by CBC radio.

Over one hundred years ago, Mary Russell Chesley (1847-1923), pioneer suffragist in Nova Scotia and early advocate for peace and arbitration, gave passionate and articulate voice to her opposition of war and militarism. Her words are as relevant today as they were in the early 1900s and she deserves to be reclaimed as a meaningful contributor to the history of peace activism in Canada. Listen to Sharon MacDonald (Halifax Monthly Meeting) discuss Mary Russell Chesley.