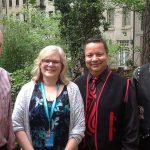 Canadian Friends Service Committee (Quakers) expresses deep concern for the current volatile situation escalating in Wet’suwet’en territory. This is the second year of increased threats on Wet’suwet’en territories, escalating from December 2018 when substantial threats of force were made against Indigenous peoples there. Intimidation, arrests leading to detention, and threats of armed violence have been used against the nonviolent gathering of Indigenous land defenders. CFSC advocates for respectful, good faith dialogue to be the approach to address concerns and de-escalate tensions.

The colonial history of prejudicial actions against hereditary Indigenous governments in Canada continues to be a major concern. Such actions perpetuate the impoverishment of hereditary governments and the peoples concerned. It is crucial that human rights are respected.

Under the authority of Wet’suwet’en hereditary chiefs, land defenders are protecting inherent Indigenous title and rights and exercising the right of self-determination. This is recognized and affirmed in both Canadian and international law. Coastal GasLink is in the process of creating a pipeline which crosses territories of many Indigenous Nations, including the Wet’suwet’en.

In December 2019, the UN Committee on the Elimination of Racial Discrimination (CERD) underlined to Canada that the Committee is “Concerned by the approval of new large-scale development projects on indigenous peoples traditional lands and territories without the free, prior and informed consent of affected indigenous peoples, such as the Coastal GasLink pipeline in the territory of the We’suwet’en people.”

Canada has repeatedly indicated to the United Nations: “Canadian society is characterized by a deep respect for shared values of freedom, democracy, human rights and the rule of law.” As UN High Commissioner for Human Rights, Navi Pillay underlined in 2012: “the rule of law without human rights is only an empty shell.”

The UN Declaration on the Rights of Indigenous Peoples affirms rights and related obligations to ensure that conflicts like this will not be addressed violently or militarily but rather resolved with negotiated solutions.

Canadian Friends Service Committee (CFSC) is the peace and justice organization of the Religious Society of Friends or Quakers. As a faith body, Quakers have been working for peace and justice for centuries and are a “historic peace church.” Our peace testimony is the root of our faith. Peace and justice are interlinked. We cannot be at peace where there is injustice.

"The dominant culture teaches us to put our faith in armaments and weapons of mass destruction to ensure safety and security," Elizabeth Rosa Yeats writes. "For over 300 years, Friends have been lovingly questioning this myth." https://t.co/SEB12iO6mB
View on Twitter
1
0

Have you missed one of our Get to Know Thee, Friend events?

You can find the recordings from past events, as well as information about upcoming events here: 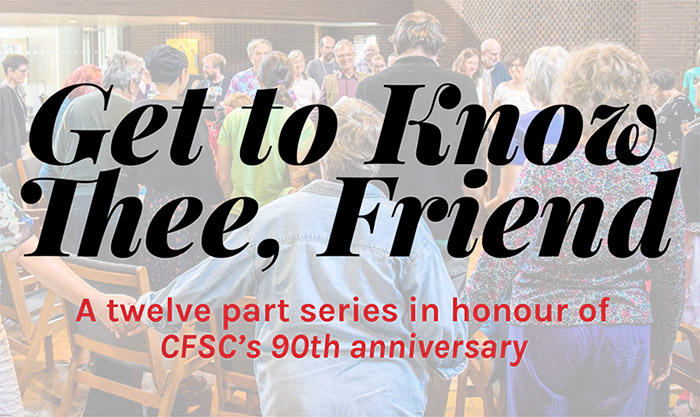 The name for solitary confinement may have changed, however experts continue to report a "shocking lack of adherence to more humane practices" in Canada

Join us this Thursday for part 3 of our monthly Ge

This is what we fought for: An open letter in supp

A Friendly reminder to join us on Thursday, Februa