Is it time for a Canadian military intervention in Iraq?

The Four Elements of Peacebuilding: How to Protect Nonviolently

“A good end cannot sanctify evil means; nor must we ever do evil, that good may come of it… Let us then try what Love will do: for if men did once see we love them, we should soon find they would not harm us. Force may subdue, but Love gains: and he that forgives first, wins the laurel.”

As global citizens, Friends are deeply concerned by the incredible violence and human suffering in Iraq and Syria. We urgently seek a response from the international community which will end horrific acts of violence like those perpetrated by ISIS against segments of the Iraqi population (CFSC has spoken out with Canadian church partners [1]) and the beheadings of internationals [2].

A small majority (54%) of Canadians support a limited military advisory intervention in Iraq [3]. But is a violent response the only, or even the most effective, option that the international community has left, given the extreme and chilling realities of Syria and Iraq today?

Public discussion seems to centre around which forms of violent response will work best. But we need not feel that the only options are to support violent intervention or to stand back and do nothing. Through the roar of outraged and frightened voices that call for violence to subdue ISIS, there are those with opinions on how nonviolence can be part of a solution [4], [5]. 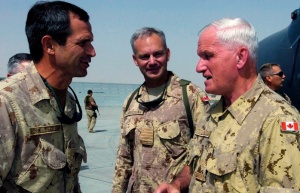 To many, the idea of a nonviolent response to such a brutal group as ISIS sounds laughable. But let’s consider the evidence.

Modern wars have terrible human, environmental, and economic costs. But in addition, they have simply proven ineffective. They consistently fail to achieve their stated goals, including the goal of lasting stability [6]. In this case, prolonged foreign military interventions in Iraq, and NATO’s support of violence in Syria, are direct causes of the current turmoil [7], [8]. Based on what recent evidence would we expect that a renewed military campaign will lead to a positive outcome in Syria or Iraq? We can also look to Libya [9] and Egypt to see that military campaigns, and control, have not led to stability or peace for those that matter – the people of these countries. 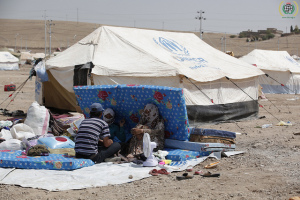 A great many studies have been produced in the past decade about how groups like al-Qaeda successfully recruit new members [10]. The findings may differ from what you’ve heard. Those who become terrorists are not poorly educated and do not display signs of major mental health problems. Almost all, however, have actual or perceived grievances based on violence that they or a close relative or friend experienced and for which they seek revenge.

For every militant killed in the name of eradicating terrorism and making our world more secure, many non-combatant civilians are killed too, often with no consequence for those who killed them, nor reparations or reconciliation. This means that a great many family and friends develop grievances, and some may turn to violence. Therefore, far from reducing the numbers of militants, a violent response from nations like Canada may fuel recruitment. It has also been noted by social psychologists who’ve studied the recruitment process that, “Although exceptions exist, terrorists are usually males between 15 and 30 years of age — the same population most likely to commit violent crime in general, and the demographic group least likely to be deterred by the threat of physical force” [11].

Even if you do not believe, as Quakers do, that killing any human is inherently abhorrent as all have that of God in them, you should begin to see that a violent response is not likely to achieve the peace so dearly sought. A war on ISIS is not, and cannot be, a well-defined war against a well-defined enemy that can be subdued through violence – ISIS is not a state, is not a stable entity of actors, and is not limited to the boundaries of a country.

So far, Canada has committed to millions in humanitarian aid and, without parliamentary oversight, has sent 69 military advisers to Iraq to take part in a 30-day “non-combat mission” [12] (likely training the Iraqi military, which Human Rights Watch [13] has repeatedly documented committing gross human rights abuses). Not only is this mission expected to be extended, given the request for added support from the United States announced on September 24th, it is likely to expand [14].

Canada urgently needs to build its capacity for non-military interventions. Nonviolent strategies need to be funded and supported as fully as a military intervention would be if we want them to achieve their goals. When the world community does not pay attention to and support local nonviolent movements, we may encourage some people to give up on these attempts and embrace violent tactics instead, with the hope that they will be more effective [15].

For all of the attention placed on which military option will work best, did you know that there are hundreds of effective nonviolent techniques that can help to build peace? [16] 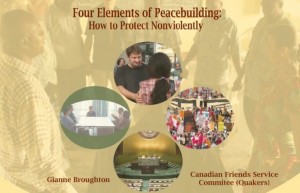 To take just one example, as described in our book, The Four Elements of Peacebuilding: How to Protect Nonviolently [17], nonviolent protective accompaniment has proven effective in brutally violent situations all over the world. It works best when teamed with adequate support for both human rights and human needs (safe drinking water, housing, education, etc.).

Human security is dependent on functional infrastructure and systems to uphold human rights and meet human needs. At best war weakens these. Thus by its very nature, war is a tool which undermines long-term security [18], [19].

Knowing the unacceptable costs of war, Canada should support local groups working to uphold human rights and meet human needs. Canada can also work to prevent ISIS from selling oil internationally to finance its operations. And Canada can support the enforcement of agreements like the Arms Trade Treaty – which regulates the international trade in conventional arms – which it has so far declined to sign and ratify [20].

We encourage you to speak up – explain to those you know that Canada’s options are not simply “send in the military or do nothing”. Our website has more information about how nonviolent techniques work to build peace.