Open letter: Canada should ratify Optional Protocol to the Convention against Torture 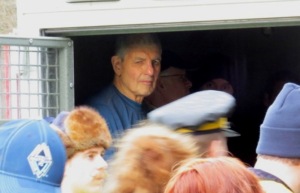 We write to express our support for, and solidarity with, those working on Burnaby Mountain to stop the expansion of the Kinder Morgan pipeline. Quakers are good citizens who seek lawful ways to promote changes within society and to make known our concerns. However, as a last resort, those Friends who are led to do so may choose nonviolent civil disobedience after much discernment.

Canadian Friends Service Committee has considered the issues at stake and found unity with the actions taken by Indigenous peoples (including our partners, the Union of BC Indian Chiefs), Friends, and other concerned citizens. We thank them for their commitment to nonviolent witness for the health of our beautiful and increasingly fragile home, the earth. We thank them for their concern for future generations.

We write as a national body engaging in Friends’ peace and justice work in Canada, because we know that this is not a set of problems which only affect the residents of BC. The best evidence suggests that this pipeline’s expansion, by tripling the volume of diluted bitumen shipped from Alberta’s tar sands through the existing Trans Mountain pipeline route, would have detrimental impacts on the climate and health of our entire planet.

Decisions made today will affect all of us in the future. That climate change impacts were not considered by Canada’s National Energy Board in its approval of this project is unacceptable. It is in the public interest that the Federal Government effectively address climate change. An equally critical reason why this project should not go ahead at this time is that Kinder Morgan and the Government of Canada have failed to obtain the Free, Prior and Informed Consent (FPIC) of the Indigenous peoples whose unceded territories would be impacted.

Friends from several countries joined together in June to express our sense of the urgent need for action on climate change [1]. We know that Canada can and must immediately invest in creating more sustainable communities by using cleaner and more renewable energy. We have the creative potential to change directions. We must move away from practices which appear poised to harm the long-term wellbeing of so many for limited short-term gain. NASA scientist James Hansen has warned that releasing the carbon contained in Alberta’s tar sands alone is likely to mean “game over” for efforts to maintain a stable climate within just a few decades [2]. Given the extraordinarily severe challenges facing us, we find the nonviolent direct actions of Friends in keeping with Quaker faith and witness on climate change and human rights. These acts are motivated by a sincere concern, in line with our Testimonies of Peace, Simplicity, Community, Equality, Integrity, and Unity with Creation.

in Friendship and with gratitude for the efforts toward a better future,