Some scientists and corporations want to alter wild animals, insects, and plants. One technology being worked on for this is called a gene drive. It would force a genetically engineered trait to be inherited by an abnormally high number of offspring. In theory this might make that trait take over in an entire wild population, or even a whole species.

A gene drive would be one of the most powerful applications of a suite of techniques collectively called synthetic biology. The effects would be difficult if not impossible to predict, and likely irreversible.

We’re concerned that the far-reaching ecological, social, and spiritual impacts of gene drives are being largely ignored. Too often discussions miss the big picture. They’re narrow and technical. Frequently they’re framed as though all gene drives are is a simple way to “alter a few stretches of DNA here and there.”

CFSC has joined again with groups from around the world to call for a pause on gene drives, at least until meaningful regulations exist. A petition from the campaign notes concerns over how to ensure meaningful free, prior, and informed consent to a gene drive that has the potential to spread in the wild. It explains, “Once released into the environment, gene drive organisms cannot be recalled nor controlled thus preempting and overriding the ability of nations, Indigenous Peoples, local communities and future generations to take their own decisions.”

We previously endorsed a similar call in 2016 (PDF). Find our more about our hopes and fears around CRISPR and the other powerful techniques called synthetic biology. 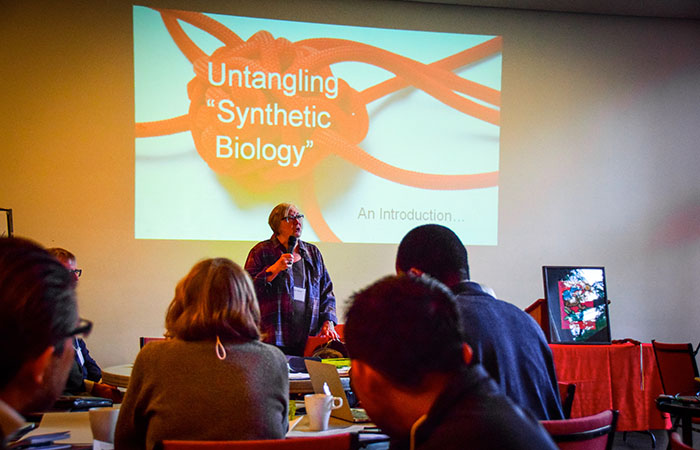 Long-time CFSC associate member for synthetic biology Anne Mitchell speaks at a conference CFSC co-hosted at Friends House in Toronto, 2017. The implications of gene drives were one topic that came up frequently over the course of the conference.