Our views on national security

Groups from around the world call for moratorium on gene drives

As Quakers, we are well aware how dangerous surveillance and a “police state” can be. ~ CFSC, December 2016

Canadian Friends Service Committee (Quakers) has made a submission to the Consultation on National Security conducted by Public Safety Canada. The topics of the consultation included the controversial Anti-Terrorism Act, 2015 (ATA, 2015 or Bill C-51), accountability and oversight of Canada’s spy agencies, prevention of radicalization, no-fly lists, security certificates, peace bonds, listing of entities as terrorists, financing terrorism, digital surveillance, and the sharing of Canadians’ private information.

These issues have been of concern to Friends since 2001 when we saw that the introduction of major new powers were not necessary given existing criminal law and were not proportionate to actual threats. Since 2001 much chilling evidence of major abuses of power has emerged to justify our concerns. Furthermore the evidence that many of these powers are required or helpful in promoting security remains scant in our view. 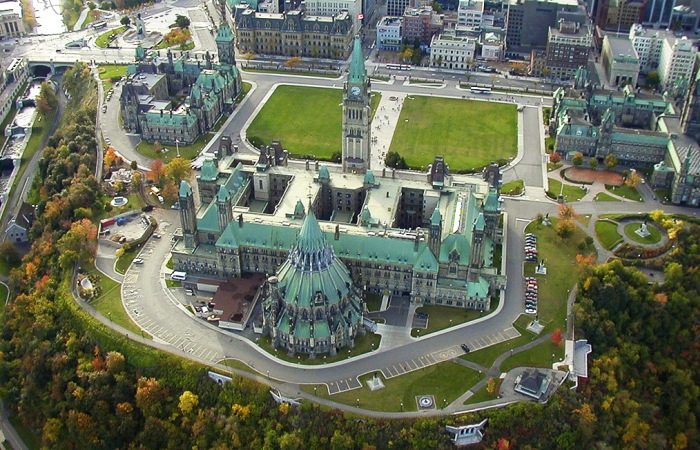 Parliament Hill in the year 2000, before new security was added. CC-BY Tsai Project


In our submission we strongly suggest the creation of a single independent review body able to review any and all government national security operations.

With respect to privacy, the document prepared by the government may represent the wishes of law enforcement as though they were needs. For example one question asks, “Currently, investigative agencies have tools in the digital world similar to those in the physical world. As this document shows, there is concern that these tools may not be as effective in the digital world as in the physical world. Should the Government update these tools to better support digital/online investigations?”

It seems from the question that the answer “Yes” may be hoped for. However CFSC rejected the premise, stating that the needs may be false or exaggerated.

In general we believe that old fashioned low tech police work is likely to be more productive and cost effective than bulk data collection and other massive invasions of Canadians’ privacy. One of the many issues with bulk data collection is that law enforcement and intelligence agencies have access to too much information, which may prevent them from being able to determine what is relevant. It is in our best security interests to use the limited human resources available only on fruitful and targeted police work, and bulk data collection does not seem to help this.

We feel that law enforcement had the tools to do their jobs prior to the ATA, 2001, or the ATA, 2015 and that both constituted unnecessary and dangerous overreaches of national security powers.

Examples of powers created through new technologies include multiple aspects of Canada’s involvement in the “Five Eyes” intelligence alliance, such as Canada’s support for efforts to weaken internet encryption protocols as well as the use by some law enforcement of “String Rays” and other technologies that collect bulk data, putting the privacy of innocent individuals at risk.

We feel that Canada’s responses to all forms of violence should be proportionate to the harm created by that violence, and should seek to prevent and reduce harm for all, taking great care not to increase harm deliberately or accidentally. For example, violence against women in Canada is a huge and persistent problem. Its prevention should be resourced in proportion to the extent of harm it creates, which is impacting many-fold more Canadians than the few instances of violent terrorism in this country.

To respond to violence, we encourage the establishment of a culture of peacebuilding. Our submission notes

We recognize the challenges faced by [surveillance and law enforcement] agencies and the desire to do their jobs well to promote national security. However we strongly disagree with the basic premises about what provides for genuine security and call for a reframing of the issues to take an evidence-based shared security approach, with a focus on prevention through meeting human needs and upholding human rights.

We advocate a shift from the failed and inherently unwinnable “war on terror” approach that unwittingly feeds radicalization, to a shared security approach. We offer the example of Canada’s involvement in Iraq and Syria to explain the failures of our current thinking about security and our need to take a broader shared security perspective. This approach seeks to engage rather than marginalize or suppress, and could best be championed by a federal Department of Peace.

We understand that the techniques described in our submission may not always be effective. However the evidence is clear that after at least 15 years of the “war on terror” its ineffectiveness is incontrovertible and terrorism is increasing. Ultimately it is only through building shared security, responding to human needs, and upholding human rights, that the root causes of terrorism will be addressed and violence will be curtailed.