Joint Statement on Physical Punishment of Children and Youth 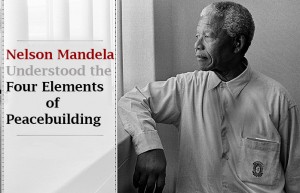 Commentary on the Transformation of South Africa by Gianne Broughton

In the wake of his death, the world has rightfully been celebrating Nelson Mandela’s achievements. Upon reading Brian Stewart’s Nelson Mandela dies: The Lincoln of Africa and just as complex on the CBC News website, I was struck by the congruence between the elements of the history of South Africa’s transformation and the four elements (power-based, rights-based, interest-based and compassion-based) that I described in CFSC’s recent publication, Four Elements of Peacebuilding: How to Protect Nonviolently.

Brian Stewart extols Nelson Mandela’s “magnanimity”, beginning by recalling that negotiations with P. W. Botha’s government began four years before his release from prison. Negotiations are interest-based peacebuilding work. The over-arching product of those negotiations was the new constitution, which Brian Stewart characterises as “one of the world’s more advanced constitutions, [providing] a rule of law, free elections and strong human rights codes that the once oppressed and their former oppressors forged together.” Framing that constitution was rights-based peacebuilding work.

There was a lot of power-based work in the story of South Africa’s transformation, ranging from utterly nonviolent actions (boycotts, unarmed demonstrations, unarmed civil disobedience) to limited violent ones. This power-based work brought the P. W. Botha government to accept the necessity of negotiations. This is how Brian Stewart characterises the latter: “He (Nelson Mandela) was able to draw even the toughest Afrikaner politicians into his orbit because of the absence of innocent blood on his hands. As a liberation movement, the ANC (African National Congress) leadership rejected brutal mass attacks on innocent civilians in favour of acts of sabotage on government installations and, futilely, the occasional direct confrontation with security forces.”

There has been a lot of debate in the peace community about the tactics chosen by the ANC, and some questioned Nelson Mandela’s eligibility for the Nobel Peace Prize because some of the tactics were not nonviolent. In The Four Elements, I point out that the use of power, if it is to be peacebuilding, has to be limited by respect for rights. The quotation from Brian Stewart indicates how the ANC’s use of violence was limited: primarily to destroy things, and when aimed at people, only aimed arms at officially armed agents of the opposition. In fact, in international law, it is lawful for people living in an occupied territory to take up arms against armed agents of the occupying power, and some people might conclude that these terms would apply in the South African situation.

Throughout his article, Brian Stewart highlights the compassion-based element of Nelson Mandela’s approach. He was able to set aside his anger while in prison and call to the common humanity in individuals on both sides, making negotiations possible. The prohibition against attacking unarmed “innocents” is also founded in that recognition of common humanity. The culminating compassion-based achievement came after his election as president, when he and the ANC (as Brian Stewart writes) “… dealt with past crimes through its truth and reconciliation commission (headed by the indomitable Anglican archbishop Desmond Tutu), not summary executions.”

As Canadian Friends Service Committee staff in Ottawa, I was privileged with an invitation to the ceremony at which Canada presented Nelson Mandela with honorary Canadian citizenship. He took the opportunity to ironically tell Canada that its tendency to turn refugees and others away raises the value of his honorary status. He also emphasized the vital geo-political placement of D. R. Congo in Africa, and challenged Canada to be instrumental in bringing peace there, in view of Canada’s stated development objectives to make a positive difference in Africa. Listening, I was reminded of the instrumental role he himself had played in bringing an end to the war in Burundi, and his leadership in so many peacebuilding causes. From early on, he really took everything that life brought him and looked for a way to turn it towards peace. We can each do the same.