Free, Prior and Informed Consent

On November 7, 2013, the Supreme Court of Canada heard the crucial case of William v. British Columbia. At stake is the right of the Tsilhqot’in Nation to own lands at the heart of its traditional territory. Canadian law recognizes that Indigenous peoples may hold ongoing title to their lands that predates colonization. Yet to date no Canadian court has ever affirmed such Indigenous title.

Amnesty International and Canadian Friends Service Committee (Quakers) joined together, and along with First Nations and other interveners, called on the Supreme Court to reject government efforts to limit First Nations’ ownership and control of land. We urged the Court to seize this moment to give practical application to human rights standards affirmed in international law, including the UN Declaration on the Rights of Indigenous Peoples.

Background to the case
The Tsilhqot’in went to court more than 20 years ago to protect land that British Columbia targeted for intensive logging. After an extensive five-year trial, Justice David Vickers concluded that governments must respect the Tsilhqot’in people’s right to use its traditional territory for activities such as hunting, trapping and the capture of wild horses.

Importantly, Justice Vickers also concluded that the Tsilhqot’in had proven title to at least 200,000 hectares at the heart of their traditional territory – land that the province had claimed was Crown property.

The BC Court of Appeal upheld Tsilhqot’in rights to use the land. However, the Court concluded that a broad territorial claim to title did not fit within the purposes of s. 35 of the Constitution Act, 1982 and that such claims must not place “unnecessary limitations on the sovereignty of the Crown or on the aspirations of all Canadians”. This limited Aboriginal title to small areas that were used on a regular and intensive basis, such as “salt licks, narrow defiles between mountains … particular rocks … used for netting salmon”.

When the case came to the Supreme Court, federal and provincial government lawyers advocated this narrow approach to Aboriginal title. Further, they argued that even if title were recognized, it should not limit provincial powers to continue making decisions about how Indigenous peoples’ traditional lands should be developed.

Serious ongoing concerns
Amnesty International and Canadian Friends Service Committee are deeply concerned that governments in Canada continue to use their extensive legal resources to oppose the rights of Indigenous peoples. Such actions are incompatible with the constitutional imperative of reconciliation between Indigenous and non-Indigenous peoples.

Restricting Indigenous peoples’ ownership of land to small areas of intensive, continuous use is blatantly discriminatory. It is inconsistent with international human rights law and disregards Indigenous peoples’ own laws, customs and perspectives. It ignores Canada’s unfulfilled obligation to provide fair redress for dispossessions and other harms inflicted on Indigenous peoples. It imposes highly restrictive criteria for establishing title that are not applied to any other landowners in Canada.

Decisions about how lands and resources are used are critically important for Indigenous peoples to maintain their cultural identities and their distinctive relationships with their lands and territories. The small spots approach to Aboriginal title would maintain the status quo in which decisions are made without meaningful involvement of Indigenous peoples, with little consideration of their needs and without adequate protection of their rights.

What our organizations support
In our joint submission we called on the Supreme Court to elaborate a principled human rights framework for the affirmation of pre-existing Aboriginal rights including title. Such recognition must be consistent with standards of international human rights law, as set out in instruments such as the UN Declaration on the Rights of Indigenous Peoples.

The UN Declaration is a blueprint for reconciliation, setting the essential terms for a new relationship between Indigenous peoples and states based on mutual cooperation and respect. Colonial-era concepts resulting in inequality, impoverishment and oppression must be rejected.

The Supreme Court previously determined that international declarations are “relevant and persuasive” sources for interpreting human rights in Canada’s Constitution and laws. This case presents a historic opportunity to use international human rights law to affirm Aboriginal title, as well as Indigenous peoples’ right to determine their own priorities for development.

The issues that the Tsilhqot’in put before the Supreme Court have been considered many times by international human rights bodies. These bodies, such as the UN Human Rights Committee and the Inter-American Court of Human Rights, have consistently found that governments have an obligation to recognize and protect Indigenous peoples’ rights to own and control the lands, territories and resources that they traditionally occupied according to their own laws and customs.

Greater control by Indigenous peoples over their lands and resources is essential to the self-sufficiency, security and well-being of Indigenous peoples. This is a matter of fundamental social justice. It is our firm belief that upholding international human rights standards would benefit all Canadians by ensuring a just and inclusive society that embraces the equality and diversity of Indigenous peoples. 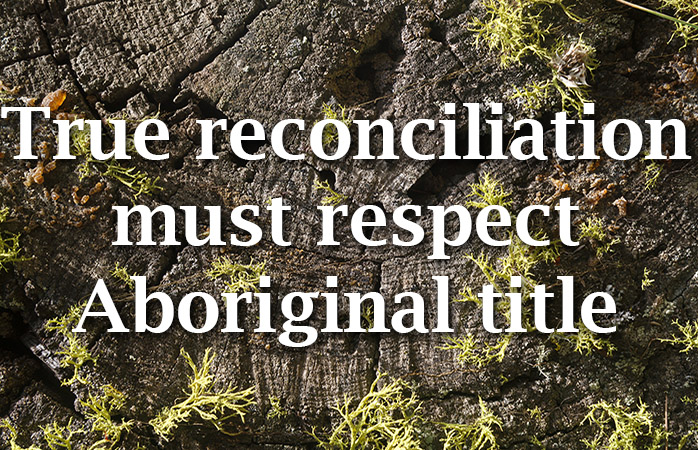