On April 24th CFSC program coordinator Jennifer Preston was invited to address Canada’s Parliamentary Standing Committee on Indigenous and Northern Affairs. The subject was Bill C-262: The United Nations Declaration on the Rights of Indigenous Peoples Act. The text of what she said is below.

Good afternoon, I am the daughter of Sarah Jane and Richard Preston and the mother of Sarah Jane Howe. I was born in the territory of the Leni Lenape, spent significant time in my childhood in Cree territory and now live in traditional Anishnabak and Haudenosaunee territory.

Canadian Friends Service Committee (CFSC) is the peace and justice organization of the Religious Society of Friends or Quakers. As a Faith body, Quakers have been working for peace and justice for centuries. Quaker service organizations were awarded the Nobel Peace Prize after the Second World War for our commitment to justice and peace. Quakers are what is called a “historic peace church”. Our peace testimony is the root of our faith. Peace and justice are interlinked. We cannot be at peace where there is injustice.

For the past two decades my professional work has focused deeply on the UN Declaration on the Rights of Indigenous Peoples – first in the international processes where it was developed and adopted and then for the past decade on implementation.

As someone with a long history of experience and expertise with the Declaration, I have published extensively on the subject including co-editing a book: The UN Declaration on the Rights of Indigenous Peoples: Triumph, Hope and Action. I am often invited to present on the Declaration to diverse audiences and am delighted to be here today.

CFSC fully supports C-262 and we urge all Members of Parliament to adopt it in a non-partisan manner.

I gave much thought to what I should share this afternoon. You have heard already from many witnesses. I do not wish to duplicate the efforts of others and at the same time there are some elements surrounding C-262 that are worth repeating.

Indigenous peoples went to the UN to negotiate the Declaration because they did not have access to justice in the domestic context. This is the most discussed human rights instrument in the history of the UN and Canada played a significant role. Indigenous peoples did this work to ensure that changes would occur on the ground.

In the decade since the General Assembly adoption there have been pockets of interesting work on implementation – accomplished mainly by Indigenous Peoples. But it is overwhelmingly evident to those of us who work intimately with the Declaration that we need the national legislative framework that C-262 provides.

The work of reconciliation 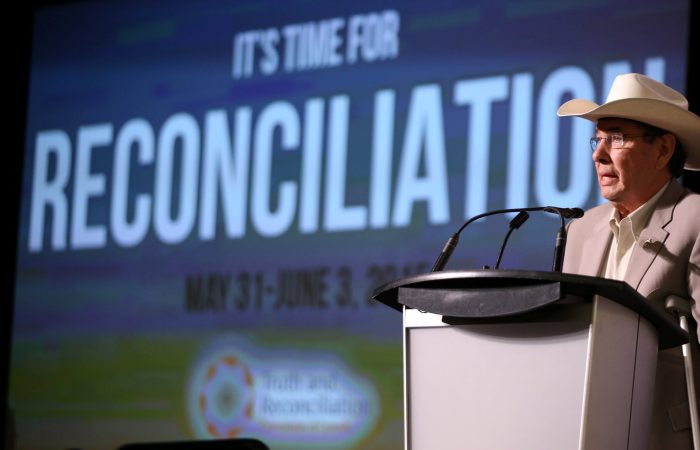 For many Faith bodies, including Quakers, the work of the Truth and Reconciliation Commission (TRC) was critically important and created a watershed moment in this country.

As you know, the Indian Residential School System was part of the destructive forces of colonization of “Canada”. The exemplary work of the TRC informs us of both the journey and the legacy of colonization.

What we learned – the Truth

The TRC and the former Chief Justice of the Supreme Court of Canada Beverly McLachlin concluded this constituted cultural genocide.

What does the TRC suggest to move forward now? – What is reconciliation?

… “reconciliation” is about establishing and maintaining a mutually respectful relationship between Aboriginal and non-Aboriginal peoples in this country. In order for that to happen, there has to be awareness of the past, acknowledgement of the harm that has been inflicted, atonement for the causes, and action to change behaviour. ~ Truth and Reconciliation Commission of Canada, What We Have Learned: Principles of Truth and Reconciliation, 2015, at 113

And this brings me to Bill C-262. This Bill creates a legislative framework to ensure that we do indeed implement the UN Declaration, not just talk about it. The TRC concluded,“that a refusal to respect the rights and remedies in the Declaration will serve to further aggravate the legacy of residential schools, and will constitute a barrier to progress towards reconciliation.”

Bill C-262 offers Canada a crucial opportunity to move from the colonial framework that dispossessed Indigenous peoples, to become a nation state that acknowledges the harm, atones for the causes, and commits to change.

Bill C-262 provides the federal government with the framework to create the paradigm shift we so urgently need to move away from colonization.

This week National leaders of many Churches in Canada, including those that ran residential schools, are writing to the leaders of all political parties to urge non-partisan support for Bill C-262.

Change can be difficult or even scary. Of course, I am aware of the fear that has been generated around both the UN Declaration and this Bill. My analysis is that fear is rooted in hanging onto colonial constructs of power and perpetuating the domination and exploitation.

Last spring, when on a speaking tour in Northern BC on the Declaration and FPIC, I gave an interview to CBC North. The interview included questions around this fear, and finally I said, “No chicken little, the sky is not falling”. Clearly, I was being rather glib, but the point is –we must let go of unfounded fears. Embrace implementing the UN Declaration through C-262 as something we can be proud of as we move forward into a new reality based on a contemporary human rights framework, not on colonialism.

Members of this committee have questioned other witnesses about FPIC. I will not go into any detail on FPIC as Paul Joffe will be covering that in his presentation. However, I wish to reiterate that FPIC was not created in the UN Declaration, it is well established in international law, and Canada has an affirmative legal obligation to respect FPIC.

I would suggest a possible addition to the preamble of Bill C-262 to further entrench the importance of reconciliation. The text could be as follows:

Whereas, as concluded by Canada’s Truth and Reconciliation Commission, the Declaration “provides the necessary principles, norms, and standards for reconciliation to flourish in twenty-first-century Canada”;

Senator Murray Sinclair informed us that the truth was hard and reconciliation would be harder. At the closing events of the TRC he also instructed all of us: “We have described for you a mountain, we have shown you the path to the top. We call upon you to do the climbing.”

In conclusion, over the past two decades occasionally people question me: “Why are Quakers so committed to this work?” The answer is simple. There is no peace without justice.

Thank you for your attention.