Open letter to those working to prevent the renewal of the Trident nuclear weapons system in the United Kingdom.

We are encouraged to hear of the mass mobilization of support for scrapping replacement of the Trident nuclear weapons system. We congratulate and hold in the Light all those who work for a world free of nuclear weapons.

In 1970 the Nuclear Non-Proliferation Treaty (NPT) came into force. Through the NPT, the United Kingdom and the four other nuclear-weapons states made a commitment to the world community to disarm. It is utterly unacceptable to all of us as global citizens that, nearly a half-century later, nuclear states continue to delay on their commitments and seek instead to renew and replace existing nuclear weapons systems. The continued existence of these weapons poses an ongoing urgent risk to all life on this planet. 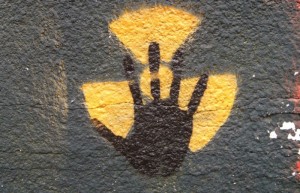 Friends’ peace testimony calls us to witness and to join with those who speak prophetically against the mistaken faith in nuclear deterrence. We profoundly disagree with this approach to security. In fact, the continued existence of nuclear weapons makes all of us less secure.
Canadian Friends are founding members of Project Ploughshares which has worked for decades on nuclear disarmament. Recently their Executive Director wrote,

The global nuclear disarmament and non-proliferation regime constitutes a case study in inequitable, discriminatory global governance…. A blatant disregard for a decades-old commitment to disarm under the Nuclear Non-Proliferation Treaty (NPT) creates strong proliferation pressures that can only be counteracted by the complete elimination of nuclear weapons.

We wholeheartedly agree. Canadian Friends Service Committee encourages states like the UK to invest in social spending instead of weapons spending. This is all the more important in the case of weapons with such unbelievably destructive potential as those the Trident program proposes to replace at a shocking reported cost of an estimated £180 billion. For the greater good of all, we hope that those who would support Trident will be moved to change their position.

with hope and in Friendship,

Learn much more about nuclear weapons through the new book Minutes to Midnight, supported by CFSC..