Quaker Response on Call to Action #48
Truth and Reconciliation Commission of Canada,
Implementing the UN Declaration on the Rights of Indigenous Peoples

#48. We call upon the church parties to the Settlement Agreement, and all other faith groups and interfaith social justice groups in Canada who have not already done so, to formally adopt and comply with the principles, norms, and standards of the United Nations Declaration on the Rights of Indigenous Peoples as a framework for reconciliation. This would include, but not be limited to, the following commitments: 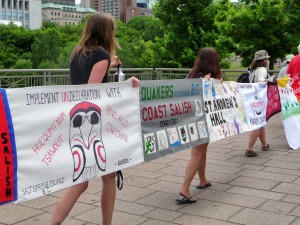 Reconciliation, as Commissioner Chief Wilton Littlechild stated, asks all involved to “open your mind and be willing to learn, and to link arms with Indigenous Peoples as we work together to heal and secure a better future.”

Canadian Yearly Meeting (the national body) of the Religious Society of Friends (Quakers) has endorsed, celebrated and committed to implement the UN Declaration on the Rights of Indigenous Peoples (PDF).

The Declaration affirms Indigenous Peoples’ human rights including the right to self-determination and rights to their traditional lands, territories and resources, as well as protection from discrimination and genocide. It also recognizes the right of Indigenous peoples to have meaningful control over their own lives including culture, religion, language, education and health. The Declaration instructs governments to obtain free, prior and informed consent when making decisions affecting Indigenous peoples.

Canadian Quakers have issued a statement formally repudiating the Doctrine of Discovery (PDF).

Canadian Quakers have formally responded to the work of the TRC, and have committed to a progress report in one year’s time (PDF).

Canadian Friends Service Committee (CFSC), the peace and justice body of Quakers in Canada, has ongoing work that responds to Call to Action #48 in a multitude of ways, internationally, nationally, and locally, both within and beyond the Quaker community. For the past two decades, CFSC has participated in the development, adoption and implementation of the UN Declaration. Ongoing implementation of the UN Declaration takes many forms and ongoing commitments.

Friends also joined in an Ecumenical Statement (PDF) on the United Nations Declaration on the Rights of Indigenous Peoples as a framework for reconciliation.