CFSC calls for an end to segregation in prisons

I would like to acknowledge the Chairperson and my Indigenous brothers and sisters from around the world. Greetings, my name is Perry Bellegarde, National Chief of the Assembly of First Nations representing 634 First Nations from across Canada with 1.4 million citizens from 58 different Indigenous nations. I am a member of Little Black Bear First Nation and a citizen of the Cree Nation. Today I am also speaking on behalf of several Indigenous peoples’ and human rights organizations, with whom we work in coalition. We greet you all in a humble, respectful way. I would like to acknowledge the hereditary leadership of the Gitsxan, Wet’suwet’en, Haida and Tsimshian Nations and all other Indigenous Nations here today.

We commend Canada for announcing unqualified support for the UN Declaration on the Rights of Indigenous Peoples. I would like to lift up Minister Jody Wilson-Raybould and Minister Carolyn Bennett for their statements. This is a critical step to achieving a just and lasting reconciliation between Indigenous peoples and Canada. Now, we look forward to the hard work of translating that expression of support into action as full partners, both in Canada and internationally.

To that end, we welcome the study of the Permanent Forum on how states derogate from the UN Declaration using procedural rules in international organizations. For us, this is the modern expression of the Doctrine of Discovery. First Nations know that Procedural violations often lead to Substantive violations. We will not accept states defining our rights in our absence or holding discussions while we observe in silence.

Since we last gathered here, the Truth and Reconciliation Commission (TRC) of Canada submitted its Final Report and 94 Calls to Action. The TRC called upon the federal government, among others, to “fully adopt and implement” the UN Declaration as the framework for reconciliation. The Prime Minister has agreed to implement all Calls to Action. 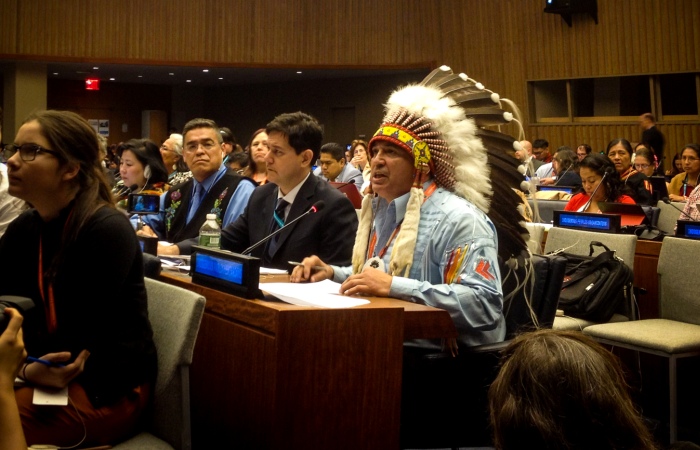 Full implementation of the UN Declaration will require long-term commitment and collaboration. We need the UN Declaration precisely because so many of the laws and policies affecting the lives of Indigenous peoples rest on foundations of colonialism and racism. As the TRC reminded us over and over again, “reconciliation is going to take hard work.”

After decades of non-recognition and denial of rights, Indigenous peoples must be full partners in the reform of state laws and policies. The UN Declaration provides a framework for the law and policy reform needed to ensure justice and achieve reconciliation, harmonious relations and lasting peace.

Member states have repeatedly denied that Indigenous peoples have the right to exercise self-determination with regard to the development of our lands, territories or resources, even when that development threatens our food sources, our cultures, our security, and our survival as distinct peoples. Such actions have threatened the peace.

Former Special Rapporteur Anaya concluded in 2012: “natural resource extraction and development on or near indigenous territories had become one of the foremost concerns of indigenous peoples worldwide, and possibly also the most pervasive source of the challenges to the full exercise of their rights.”

Recognizing Indigenous peoples’ human rights, including the free, prior and informed consent to development on our traditional lands and territories, will lead to greater peace and security for all. FPIC, very simply, is the right to say yes, and the right to say no. It is much more than a process of consultation.

I bring to your attention the recommendation of the Committee on Economic, Social and Cultural Rights, made to Canada earlier this year:

Implementing the UN Declaration as a framework for reconciliation will usher in an era based on justice, recognition of rights, and partnership. It will return us to the relationships entered into by our ancestors, relationships founded on peace, security and prosperity for all in Canada and beyond.

Indigenous peoples are calling for the full adoption and implementation of the UN Declaration by Canada through a legislative framework. The Private Members Bill C–262 tabled by Indigenous member of Parliament Romeo Saganash is a floor for action. We welcome discussions on how best to build upon the foundation in his Bill to achieve peace, justice, and well-being.