Governments must not ignore human rights in decisions about pipelines

Joint Statement on Physical Punishment of Children and Youth 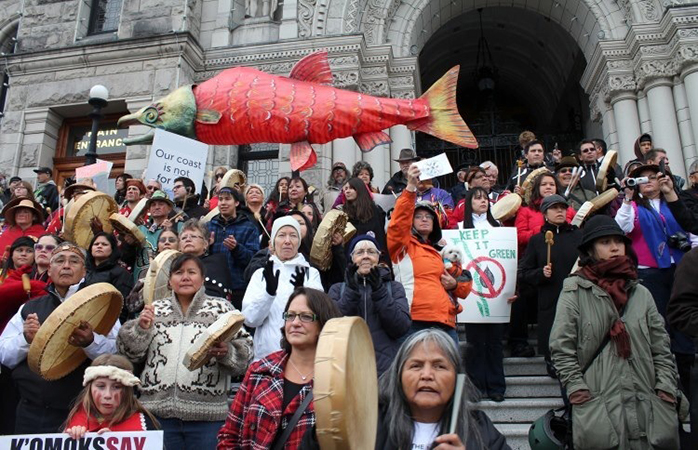 
Downplaying the human rights of Indigenous peoples will only exacerbate conflict over pipeline development in British Columbia.

In a joint submission tabled with the Prime Minister’s office last month, 11 human rights and Indigenous peoples’ organizations, including the BC Assembly of First Nations, First Nations Summit, and Union of BC Indian Chiefs, caution that development of energy infrastructure such as pipelines can have far-reaching effects on Indigenous rights protected under the Canadian Constitution and international law.

The joint submission responds to two reports currently being reviewed by the federal cabinet: the report of the Prime Minister’s special representative on West Coast energy infrastructure, Douglas Eyford and the report of the environmental assessment panel for the proposed Northern Gateway pipeline.

While these two reports acknowledge that Indigenous peoples’ rights are at stake in decisions about whether or not to approve pipelines and other projects, neither adequately addresses the legal framework for safeguarding these rights and neither accommodates a human rights-based approach.

“The federal government should be careful about taking guidance from any report that fails to fully and accurately address the rights of Indigenous peoples,” said Grand Chief Stewart Phillip of the Union of British Columbia Indian Chiefs. “Failure to respect and protect Indigenous peoples’ human rights from the outset guarantees prolonged conflict and a compounding of historic injustices. This is contrary to the fundamental obligation of governments to uphold the human rights of all, without discrimination.”

In two landmark British Columbia cases, Delgamuukw and Haida Nation, the Supreme Court affirmed that governments have a mandatory duty to consult in good faith with Indigenous peoples on decisions affecting their rights and that this includes an obligation to obtain consent on “very serious issues”.

This existing protection in Canadian law is reinforced by a large body of international human rights law, particularly in the context of resource development, which sets out a duty to obtain the free, prior and informed consent of Indigenous peoples.

“It’s crucial that all decisions about sustainable development in Canada live up to human rights protections set out in both Canadian and international law,” said Kenneth Deer, Indigenous World Association, “In the case of projects like the proposed Northern Gateway pipeline, the scale of the project and the seriousness of Indigenous peoples’ concerns mean that the appropriate standard is for the project to proceed only with consent.”

“In order to have good faith consultation and accommodation, the government has to be prepared to accept a wide range of possible outcomes, from a project being considerably modified or delayed, to its being rejected altogether,” said Alex Neve, Secretary General of Amnesty International Canada.

Grand Chief Edward John, First Nations Summit, said, “It’s not acceptable for government to look at a proposed project and say that from its perspective the potential impacts aren’t serious or our rights and jurisdiction can be circumvented. The legal duty to obtain consent is a protective measure to ensure that the priorities and concerns of Indigenous peoples are given full consideration and that the biases of government don’t trump human rights.”

BCAFN Regional Chief Jody Wilson-Raybould commented, “There is no question that the federal government has weakened environmental laws and federal oversight to the detriment of Indigenous Peoples. Moreover, by seeking to redefine the rights of Indigenous peoples in Canadian and international law to minimize its own responsibilities, Canada is not only doing disservice to Indigenous Peoples but to all Canadians.” She added, “First Nations are not, in principle, opposed to major resource development but not at any cost nor without Indigenous rights being addressed. The economic future of First Nations, BC and Canada are intertwined and the federal government should know by now that their current approach only deepens conflict, rather than promoting reconciliation and ensuring economic prosperity for all.”