In June, Canada’s Minister of National Defence Harjit Sajjan announced a 73% increase in military spending, which, if it happens, would take Canada’s military budget to $32.7 billion a year.[1. Gillies, Rob. “Canada to increase military spending 70 percent in 10 years.” DefenseNews, June 7, 2017] This is a complete about face from policies under the previous government, which cut Canada’s defense spending (along with other cuts to government spending).[2. Brewster, Murray. “Canada talks tough on Ukraine, but cuts $2.7-billion from defence in 2015.” The Toronto Star, September 1, 2014]

Minister of Foreign Affairs Chrystia Freeland said in her speech about Canada’s new foreign policy priorities, “Canadian diplomacy and development sometimes require the backing of hard power.”[3. Austen, Ian. “Canada Will Pursue a More Robust Global Role, Minister Says.” New York Times, June 6, 2017] Freeland suggested in discussion with the press that there are “many threats to the liberal international order” and so Canada must be ready to fight wars internationally to protect our values and human rights.[4.Tunney, Catharine. “Chrystia Freeland says time has come for democracies to ‘use hard power where necessary’.” CBC News, June 10, 2017] Taken together, it appears that a push is being made to increase Canada’s involvement in wars abroad.

The logic offered by Minister Freeland for this move is not compelling. A key point from her speech is that the US is no longer interested in being a leader on the world stage and that “Canada’s geography has meant that we have always been able to count on American self-interest to provide a protective umbrella beneath which we have found indirect shelter” but this is for some reason no longer appropriate. There is no good explanation as to why.

In fact, the government of the US is seeking to greatly increase its military budget, already by far the biggest in the world.[5. Osborne, Samuel. “Donald Trump promises ‘historic’ increase in US military budget.” The Independent, February 27, 2017] And there is no threat to Canada’s territory or “our values” that hasn’t existed for years. We see no major change in international affairs that could have triggered a major shift in Canada’s military policy and spending. 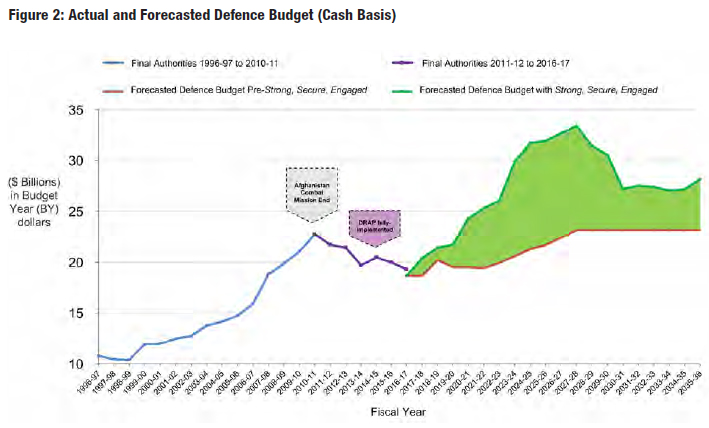 The majority of the announced spending will be for fighter jets and war ships, with a 5% proposed increase in sailors, soldiers, and air force personnel (about 5,000 regular and reserve personnel all told). The next five years of the new plan propose an increase of $6.6 billion in spending with much greater increases happening in subsequent years. No explanation has yet been offered as to whether budget cuts to other departments, or an increased deficit, will pay for this increase in military spending.[6. The Globe and Mail. “Globe editorial: Why increase Canadian military spending? One word: Trump”, June 7, 2017] [7.LeBlanc, Daniel and Chase, Steven. “Ottawa lays out $62-billion in new military spending over 20 years.” The Globe and Mail, June 7, 2017]

The new defence policy is primarily focused on offensive capabilities, rather than supporting Canada’s territorial integrity, reinforcing individual safety through search and rescue in Canada, or reviving Canada’s role in peacekeeping activities. It is also noteworthy that while the justification for this spending was an increased role for Canada on the world stage, the government chose not to offer any increase in foreign aid spending.[8. Canadian Council for International Cooperation. “Budget 2017 lacks long-term strategy and undermines Canadian leadership in global sustainable development.” March 22, 2017]

There are many uncertainties at this point. For instance, will this new money actually materialize? The bulk of it is not guaranteed by any means, and is contingent on future governments continuing to support this policy direction. Also, we don’t know how much the military equipment Canada is planning to purchase will actually cost. Canada has a history of severe problems with military procurement, with costs often ballooning even as quality of equipment proves not up to the standards promised in initial announcements.[9. The Fifth Estate. “Runaway Fighter.” CBC, September 28, 2012]

It’s disturbing that such a major policy shift was not an election issue. If any government department’s budget was to be raised by more than 70%, that should have been a significant part of the Liberal campaign platform, if not the single cornerstone policy. Forthrightness about policy plans would have allowed Canadians to learn about this significant issue and decide whether or not they support it. As it stands, there have not been parliamentary, much less public, debates about increasing Canada’s role in foreign wars. We believe such a process of public discussion must still take place.

Canadian Friends Service Committee is continuing to track this issue, while supporting a Department of Peace as a way to constructively engage on the world scene and avoid needing the “hard power” the Minister of Foreign Affairs has focused on.