Canada should follow lead of Truth and Reconciliation Commission

Canadian Friends Service Committee is deeply troubled by the worsening refugee crisis in the world today – faced by an estimated nearly 60 million forcibly displaced people. Of late, the plight of Syrian refugees in particular has received a great deal of long overdue attention among Canadians.

As Friends, we feel called to follow what 18th century Friend John Woolman said was the business of our lives, “to turn all the treasures we possess into the channel of universal love.” We recognize the need for Canada, with so many treasures to offer, to act compassionately and to welcome and foster the successful integration of refugees. We note that, according to the UNHCR, 86% of refugees live in developing countries. Canada is not among the countries that welcome the most refugees.

Our analysis of recent legislative changes suggests to us that the current approach is not what it can and should be. As Friends we must speak, with love, our concern for the wellbeing of refugees. We have done so through nonviolent protest of federal government decisions such as cuts to healthcare coverage, which appear to us punitive and out of line with our professed desires as a country to be a world leader in supporting refugees.

We are members of the Canadian Council for Refugees (CCR), which has issued many sound and evidence-based suggestions to improve Canada’s response to the Syrian refugee crisis and support to refugees more generally. 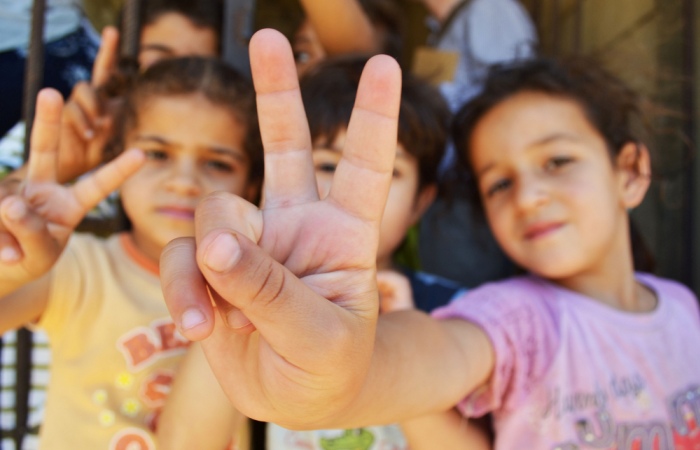 In addition to our membership in CCR, at the national level, Friends support the work of Toronto Monthly Meeting’s Quaker Committee for Refugees, which provides many valuable services to refugees.

Our communities are closely connected, and actions in apparently remote parts of the world have future effects in Canada. Refugee crises do not appear from nowhere, and Canada has a responsibility to help prevent them through actively supporting peacebuilding.

CFSC has previously expressed our view that a military intervention in Iraq and Syria is an inappropriate response which will not lead to increased peace or stability. The current refugee crisis is one tragic result of a slew of such failed policies adopted by countries including Canada.

We are deeply troubled, for instance, by reports that Canada has delivered some $718 million worth of weapons to Syria since civil war erupted in that country in 2011. We find it unconscionable that Canada should stoke the flames of war through such transfers of arms. This is among Canada’s direct contributions to the creation of the current Syrian refugee crisis. The same general pattern can be observed elsewhere in the world. We call on Canada to support nonviolent alternatives instead of providing arms and intervening militarily in conflicts.

In April, CFSC joined with other members of the Canadian Council of Churches in drafting a letter to the Prime Minister which expressed our urgent appeal to engage in constructive non-military actions to support peacebuilding in Iraq. This letter included a call for Canada to increase support to Iraqi and Syrian refugees. The actions called for are, sadly, now more urgent than ever.

Canadian Friends Service Committee is the peace, social justice and international development arm of the Religious Society of Friends (Quakers) in Canada. Friends who wish to sponsor refugees may find this brief Globe and Mail article of interest, as well as this document about the Private Sponsorship of Refugees Program.