CFSC, the peace and social justice agency of Quakers in Canada, wrote yesterday to Minister of Foreign Affairs Chrystia Freeland to express deep concerns about Canada’s involvement in the arms trade.

Canada’s arms industry is opaque, as are the criteria for approving arms sales, and the role of the Canadian Commercial Corporation.

What CFSC has been able to learn is alarming. For instance, partners of ours alerted us to the fact that drones used by Israel to fire tear gas during mass killings (largely of unarmed civilians) in Gaza appeared to contain parts made by the Canadian company Actuonix.

We are encouraged by Canada’s joining the Arms Trade Treaty (ATT). However, we also have significant concerns that proposed legislation would not ensure Canada meets the standards established by the ATT. Article 6.3 of the ATT states:

A State Party shall not authorize any transfer of conventional arms […] if it has knowledge at the time of authorization that the arms or items would be used in the commission of genocide, crimes against humanity, grave breaches of the Geneva Conventions of 1949, attacks directed against civilian objects or civilians protected as such, or other war crimes as defined by international agreements to which it is a Party.

How is the likelihood that Israel will use Canadian weapons systems against civilians, in violation of international law, taken into consideration by Canadian regulators when issuing export permits? Where is the accountability when this foreseeable event happens, as the world has recently witnessed in Gaza? We have already expressed similar concerns regarding Canadian exports of light armoured vehicles to Saudi Arabia. 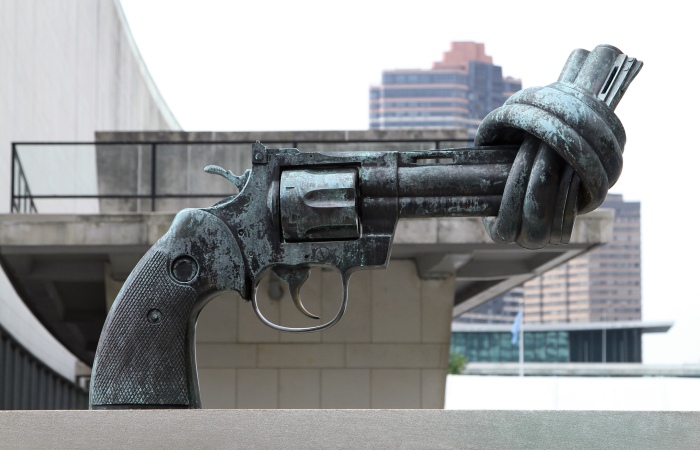 A statue given to the United Nations in New York by the government of Luxembourg. Photo cc-by Jim Capaldi


We’re also deeply concerned with the fact that arms exports to the US are exempt from review and reporting. This will profoundly compromise Canada’s participation in the ATT, even signalling to other countries that they too can undermine and contravene the ATT’s intent. The ATT is meant to apply globally, and calls on state parties to have “an effective and transparent national control system regulating the transfer of conventional arms.” We can’t see how such a system will be possible for Canada while exempting the majority of Canadian arms exports, which go to the US.

Download a copy of the full letter in PDF.