Joint statement from UN in Geneva

Event video: Implementation of the UN Declaration on the Rights of Indigenous Peoples in Canada

One easy change in perspective can deepen your understanding

We take this opportunity to highlight recent positive developments in Canada that can provide a helpful model for advancing the implementation of the UN Declaration on the Rights of Indigenous Peoples in other countries and regions.

Last year, on June 21 the Parliament of Canada adopted federal implementation legislation called “An Act respecting the United Nations Declaration on the Rights of Indigenous Peoples”.

Our Nations, Governments and Organizations welcomed the adoption of the legislation as a landmark achievement bringing us significantly closer to ensuring that the rights recognized in the UN Declaration can be protected and promoted on the ground.

First, the Act requires Canada to adopt a national action plan developed on the basis of “consultation and cooperation” with Indigenous peoples.

Second, the Act commits the federal government to “take all measures necessary to ensure that the laws of Canada are consistent with the Declaration.” This again must be done in “consultation and cooperation” with Indigenous peoples. 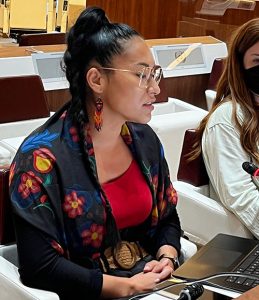 Sashia Leung delivers this joint statement on behalf of the Coalition for the Human Rights of Indigenous Peoples.

Our Nations, Governments and Organizations believe that it is highly significant that these crucial paths to implementation are now enshrined in legislation.

Canada has had a rocky history with the Declaration. Many will remember that Canada originally voted against the Declaration at the UN General Assembly before finally endorsing the Declaration in 2010. Past governments have opposed application of the Declaration in court cases involving the rights of Indigenous peoples. Furthermore, prior to 2021, two previous efforts to bring forward implementation legislation were blocked by partisan maneuvering in Parliament.

In it is our hope that the adoption of the national implementation act, and similar acts at the provincial and territorial level, will provide greater assurance to Indigenous peoples that Canada’s human rights commitments will not waver with the changing of governments.

The national implementation legislation includes the requirement that annual progress reports be submitted to Parliament. The first such report was tabled last month. The Act also includes provision for additional accountability and recourse measures to be jointly developed with Indigenous peoples. The first action plan is to be tabled within the year.

British Columbia was the first province in Canada to implement the UN Declaration into legislation in November 2019, and its first action plan was developed in consultation and cooperation with Indigenous peoples and has already been launched.

Transforming a colonial system of law and policy is a complex and difficult task. While the process had only just begun in Canada, we believe an important step has been taken by entrenching Canada’s commitments to the Declaration in national and provincial legislation.

For further reference, we have many resources on the legislation on our website: https://DeclarationCoalition.ca