Free, Prior and Informed Consent 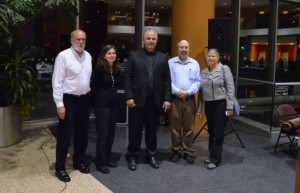 Members of CFSC met up with Are Høidal, governor of Norway’s second largest prison, Halden Prison. Are Høidal was the keynote speaker at an event hosted by the Church Council on Justice and Corrections. Are spoke on Norway’s focus on human rights and respect and on Halden prison’s architecture and design that is integral to their innovative rehabilitation approach to corrections. To get people thinking about this approach Are always asks the question, “I release your neighbour, what kind of neighbour do you want?”

The aim of their approach is for inmates to leave as better persons. There is no overcrowding; one person per room and all inmates have a private bathroom, fridge and flat screen television. The guards do not carry guns that create distance and increase aggression. Instead the guards see themselves as social workers that aid in the rehabilitation process. There are no bars, but lots of windows, a library, gymnasium, workshops for various kinds of educational and vocational training, green space, medical and addiction services, and space to host the families of inmates. Other than a restriction in liberty, no other human rights are removed as a result of sentencing. With a focus on rehabilitation and successful reintegration, Norway’s significant lower recidivism rate is evidence that punitive approaches and repressive prisons don’t work.